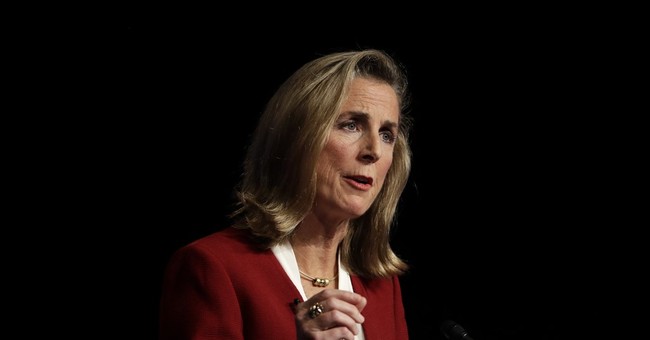 Senate Democratic candidate Katie McGinty may be guilty of ethics violations, thanks to new emails obtained by The Republican Party of Pennsylvania. It seems that when McGinty was Democratic Gov. Tom Wolf's chief of staff, she was already planning her Senate run.

In one email from 7:49 a.m. on June 22, 2015—a month before McGinty resigned—she responds to a staff email outlining Wolf's numbers in a Quinnipiac poll to ask if they can also send her Republican Sen. Pat Toomey's stats.

In a separate screenshot of a schedule, it notes McGinty would not attend a state government meeting, but would meet with Sen. Elizabeth Warren (D-Mass.) at a law firm in Philadelphia. The third screenshot is of a July 2015 email of McGinty sending contact info for Sen. Chuck Schumer (D-N.Y.), though it is unclear whom she is emailing.

This type of political activity during government work hours is forbidden, according to state ethics guidelines. So, the Pennsylvania GOP is demanding some kind of repercussion.

Republican Sen. Pat Toomey is also asking McGinty to release all her emails for complete accountability.

Like Democratic presidential nominee Hillary Clinton, who is facing her own email investigation, McGinty says she has nothing to hide.

Will this scandal affect her polling, however? She is currently ahead by an average of 4 points.

We'll be keeping a close eye on this one.