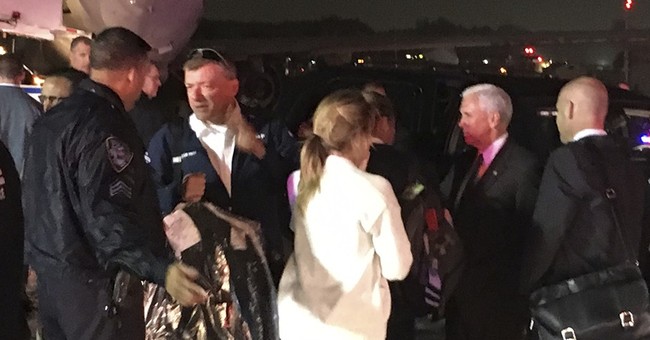 Gov. Mike Pence, Donald Trump's vice presidential running mate, did not panic as his campaign plane skidded off the runway at New York's LaGuardia airport on Thursday night. Although he and his fellow travelers faced "ten seconds of uncertainty," Pence explained on "Fox & Friends" the morning after the incident how they were able to remain so calm.

"The safest place in the world is to be in the center of God's will, so we had no anxiety." -@mike_pence on the LaGuardia plane incident pic.twitter.com/qiHoIlQdEz

The sense of peace Pence experienced was shared with the other passengers in the aircraft, including Pence's wife (who is a trained pilot), his eldest daughter, and several aides and reporters.

"We just immediately felt heavy braking on the runway and the plane fishtailed a little bit and just for a few seconds you could feel us bouncing off and with mud splattered up on the windows," Pence said Friday on Good Morning America. "We figured we were off the runway but thank god everybody was fine."

Pence said he was grateful for the first responders who swarmed him and his family after the plane came to a stop. Trump called him twice while he was on the runway to ensure he was alright, while several politicians, including Democratic nominee Hillary Clinton, tweeted words of support noting they were thankful Pence and his team were unharmed.

If this ordeal has proven anything, it's that the vice presidential nominee would have nerves of steel during a national emergency.