‘P**** Grabs Back’: Wash U Students Sound Off on Trump Tapes 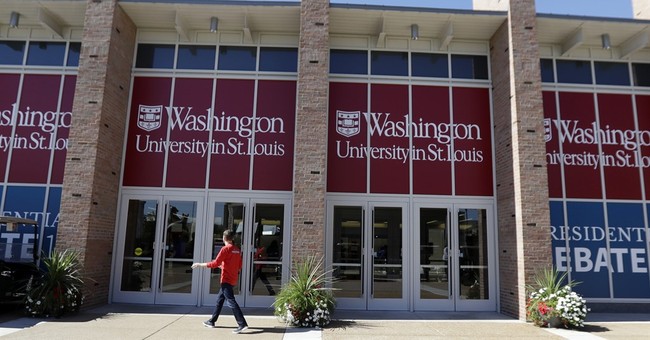 St. Louis, MO - We knew the controversial Trump tapes that were unearthed over the weekend would be a hot topic at Sunday night’s presidential debate. Everyone, both Democrats and Republicans alike, would agree that the content was inexcusable. They needed no context. His words were so lewd and narcissistic it even spurred a rare apology from the GOP nominee.

Washington University students were more than happy to share their opinion on Trump’s latest media gaffe hours before the candidates descended on their campus. One large group of progressive students formed a circle to speak out against police violence. One young lady in particular caught my eye because she was carrying this sign.

I asked the student, Jessie Thornton, a sophomore at Washington University, to explain. To sum up, she said she was sick of the violence Trump seems to promote with his misogynistic rhetoric. She said that she herself has “privilege,” but she’s willing to acknowledge it.

It wasn’t just female students, however. Two male students named Rob and Alvin sounded off on the GOP nominee. Alvin was especially dismayed by the “casual sexism” being espoused in this election. When I asked if he specifically meant the Trump tapes, he nodded.

He hoped, however, that tonight’s debate would focus on real policy issues because “we already know he’s a piece of crap.”

Some students did have criticism for Hillary Clinton. Two seniors who identified as Gary Johnson supporters said both candidates have character flaws. Clinton’s being her inability to tell the truth and that there are just “too many questions” about her email and Clinton Foundation scandals.

When asked about Trump’s vices, the students said, “Where do you start?”