Why Lester Holt Is Being Called the 'Third Debater' 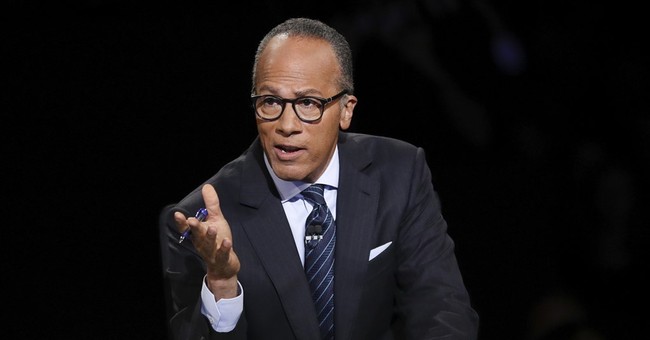 In Townhall's initial assessment, some of us concluded Lester Holt was a fair and neutral presence in Monday night's showdown between Donald Trump and Hillary Clinton. Other viewers, however, did not see it that way and make some good points.

Trump-friendly audiences were not happy that Holt spent countless minutes asking the GOP nominee about the birther controversy, his tax returns, and his past comments about women. The moderator also interrupted Trump more often (although that may be because Trump exceeded his time more often) and saved his only fact checks for Trump's answers on the Iraq War. This explains why Heat Street dubbed Holt the "Third Debater."

https://t.co/jsUQeDSGFd
This is exactly how I saw the debate go last night. Hopefully, many people saw how one sided the debate was.

https://t.co/VzLAnzpMUQ Lester Holt, how dare you show up under the guise of a neutral moderator. You disgraced yourself and a nation. #Holt

It's also worth noting what Holt did not ask. The GOP found an important list of topics Holt managed to avoid at the debate that would have put Clinton on her toes. They provided the list in a press release on Tuesday.

1: The 5 Aides Given Immunity By The FBI Or Her Reckless Secret Server

#2: The Multiple False Statements About How Her “Extremely Careless” Actions Endangered Our National Security

#3: Her “Basket Of Deplorables” Insult Toward Millions of Americans

#5: Her Failures And Lies On The Attacks In  Benghazi

#6: Her Support For Obamacare

#7: Her Deep Support From And Ties To Wall Street

#9: Her Comments About Wanting To Put The Coal Industry Out Of Work

#10: Her Deception And Lack Of Transparency On Her Health

Will Clinton be forced to answer these questions in the following debates? Or will it be up to Trump to bring them up?

Katie Pavlich
Is the CDC's Latest Mask Guidance Based on Junk Science?
Katie Pavlich
Why is an Election Denier Fundraising Off of False Accusations His Opponent is One?
Rebecca Downs
CARTOONS | AF Branco
View Cartoon
Most Popular