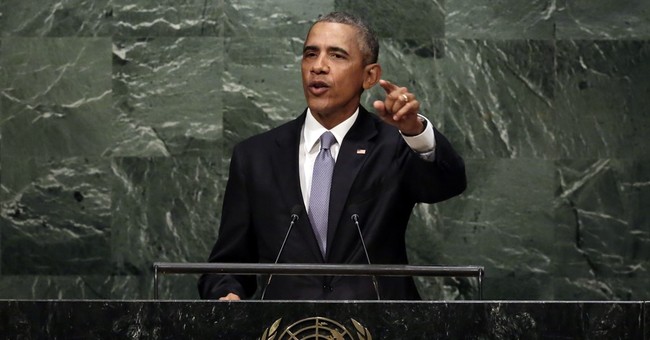 In his final address to the United Nations on Tuesday, it seems President Obama could not give up the chance to offer another dire warning against GOP nominee Donald Trump’s plan to build a wall on the U.S.-Mexico border.

“Today, a nation ringed by walls would only imprison itself," Obama said to the UN General Assembly on Tuesday.

It was a subtle, yet obvious reference to Trump’s most controversial campaign proposal. The president appeared to use it to make his larger point that we cannot reject global integration.

“We must work together to make benefits that are broadly shaped,” the president said.

A quarter century after the end of Cold War, he said, the world is less violent and more prosperous, yet societies continue to be filled with uncertainties and unease, he noted.

“At this moment we face a choice: we can choose to press forward with cooperation or we can retreat into a world sharply divided.”

The integration of a global economy has made life better for billions of people, he continued, noting that the level of poverty worldwide has been drastically cut.

Globalization needs a “course correction,” he said. The kind of aggressive nationalism and crude populism often voice by the “far right” must be suppressed.

Those visions, he said, are powerful, but they cannot deliver prosperity over the long-term.