The Bold Faith of Our U.S. Athletes on Full Display in Rio 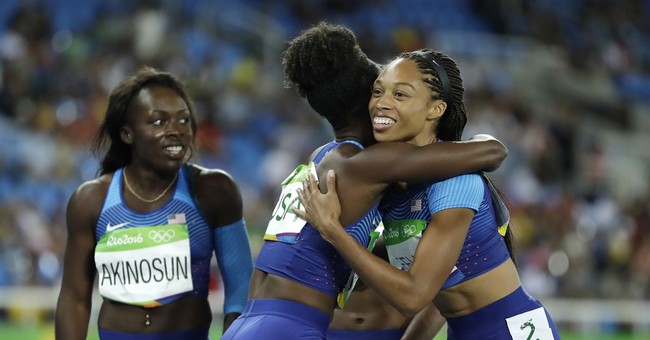 Team USA has had one of its most impressive medal hauls in Olympics history during the 2016 summer games. We were dominant throughout Rio and thanks to a relay win in the aquatics center we became the first country to win over 1,000 gold medals. Yet, even more impressive, is that everywhere from the diving board to the track, our U.S. athletes were giving glory to God for their success. In a culture where God is routinely forgotten, this Olympics was a much needed reminder about what’s truly important.

I’ve highlighted five of the boldest faith moments displayed by our athletes these past two weeks.

Shot putter Michelle Carter bested her dad, a silver medal winning shot putter in his own right, by gaining gold in Rio last week. On Twitter, however, instead of bragging about her achievement, she used the hashtag #ThrowingByFaith and thanked Jesus for her success.

She also spoke with NBC about who was to thank for the victory.

Asked for her thoughts about the win immediately after clinching it, Carter told an NBC national audience, "I knew I had to bring my A-game, and all I could do was pray and ask the Lord: 'Lord come on, You told me that I had the victory.' I came through on that last throw, and it was amazing."

4. U.S. and New Zealand runners show camaraderie after colliding during the 5,000m race.

In the women's 5,000-meter race, U.S. runner Abbey D'Agostino collided with New Zealand's Nikky Hamblin. Instead of cursing each other out, Hamblin stopped, bent down, and helped D'Agostino to her feet before they encouraged one another to eventually finish the race. Speaking with "Today's" Matt Lauer about the fall on Thursday, D'Agostino said it was "the spirit of God" in her that moved her to continue the race. The two runners embraced one another at the finish line.

Team USA swept the 100m hurdles for the first time ever – and they knew who to praise for the accomplishment. Gold medalist Briana Rollins, silver medalist Laila Ali and bronze medalist Kristi Castlin spoke with NBC after their race. Rollins said the three of them prayed before the race and their main goal was to “glorify God.”

2. Silver medal-winning divers know their 'identity is in Christ.'

I have to give the number two spot to the diving duo that got the ball rolling early in Rio with their faith proclamations. After winning the silver in men’s diving, David Boudia and Steele Johnson told NBC that they were able to achieve the goal by knowing their identity is in Christ.

The way @DavidBoudia & @Steele_Johnson shined their lights for Christ after winning silver medals had me cheering!???? pic.twitter.com/dfrUQ8uHzM

1. The U.S. women’s relay teams praying live on camera after winning both the 4X100 and the 4X400 meter relays.

Not only did our U.S. women's relay team dominate the 4X100m and the 4X400m relay races, but they prayed live on camera immediately after their win. Allyson Felix, who ran in both races, herded her teammates into a huddle before they took their victory lap and they bowed their heads in prayer.