Watch: USA Divers Tell NBC Reporter They Won Silver Medals Thanks to Their 'Identity in Christ' 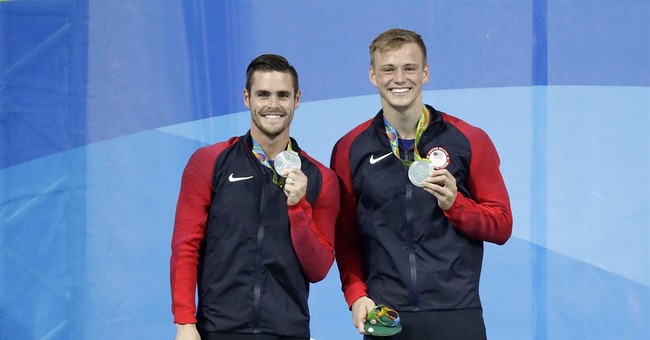 A golden moment took place alongside the Rio Olympic diving boards Monday night. The Chinese team of Chen Aisen and Lin Yue may have taken first place, but U.S. divers David Boudia and Steele Johnson stole the spotlight in their NBC interview by giving all the glory to God after their silver medal-winning performance.

The way @DavidBoudia & @Steele_Johnson shined their lights for Christ after winning silver medals had me cheering!???? pic.twitter.com/dfrUQ8uHzM

Boudia has been a very outspoken Christian for years. Here's what he told BeliefNet.com in 2012 about his walk with Christ and how it gives him peace in the most pressure-filled moments:

“It’s totally freeing when I stay in tune with scripture,” Boudia said. “I don’t have to worry if I miss a dive. I go into competition and it’s like, ‘Praise God no matter what.’ If I do well, that’s awesome. I praise Him. If I don’t do well, praise Him even more. Competition looks way different now.”

Boudia goes into more detail about his faith in his book Greater Than Gold: From Olympic Heartbreak to Ultimate Redemption.

Johnson, who also identifies as a Christian, has a similarly impactful story about his reliance on God. When he was 12, he almost died doing the sport he loves, hitting his head on a concrete platform. He has since used the accident to fuel him. "God kept me alive and He is still giving me the ability to do what I do,” he has said about the near fatal fall.

In an Olympic Games, it can be easy to get lost in one's own talent and fame. Kudos to Boudia and Johnson for keeping the right perspective.