Rio Police: There Was No Robbery 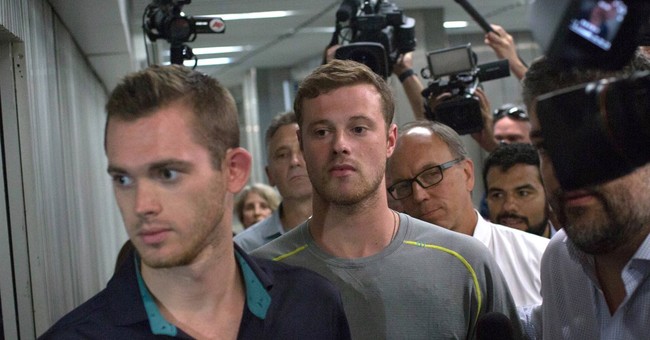 UPDATE: The USOC has released a statement about the incident involving four American Olympic swimmers and the Rio police. The swimmers' passports have been released and they have left Rio. Clearly, however, the committee was not happy with the athletes' behavior.

Was Olympic gold medalist Ryan Lochte robbed at gunpoint in Rio de Janeiro as he claimed on NBC's "Today" earlier this week? No, according to Rio authorities. At a press conference on Thursday, police said that the U.S. swimmer made the story up in order to cover up he and his fellow swimmers' embarrassing antics at a local gas station.

“It became obvious fairly early that at least one swimmer had a motive to tell a story that was different from the real one,” said authorities.

Police detectives at the station were able to determine “an act of vandalism” had been perpetrated by at least one athlete. The athlete in question broke mirrors and other equipment in the station as employees of the gas station tried to control the situation.

A security guard at the gas station confirmed the police report.

“Police can confirm there was no robbery the way it was reported by the athletes,” police concluded.

Additionally, one witness at the gas station is currently being interviewed and one of the swimmers has confessed.

As for Lochte's claim a gun was put to his head, the police said it was a security guard, not a robber, that pointed a gun in his direction. He reportedly demanded money to compensate for a gas station door the swimmers broke.

New surveillance footage, while it doesn't show the confrontation with the security guards, does corroborate the authorities' report. In the video, Lochte and his fellow swimmers Gunnar Bentz, Jack Conger and James Feigen are seen leaving a gas station and getting into their taxi, before an attendant orders them to get out of the car, reprimanding them for causing damage to the station.

The swimmers' story at first seemed plausible, considering Rio has a history of police corruption and other athletes may have actually been robbed at gunpoint during the Games. Yet, as more details surfaced, it became clear the three young men sensationalized the story in order to protect their image. One, they were breaking the USA swim team curfew; two, they were intoxicated. Lochte had already traveled home to the States before a Rio judge ordered the swimmers to stay in Brazil, but Bentz and Conger were pulled off their flights Wednesday by authorities.

Now, however, Lochte, Bentz and Conger may face a much greater punishment for their fabricated tale, including fines and even jail time.

The investigation, police stressed, is not yet complete.