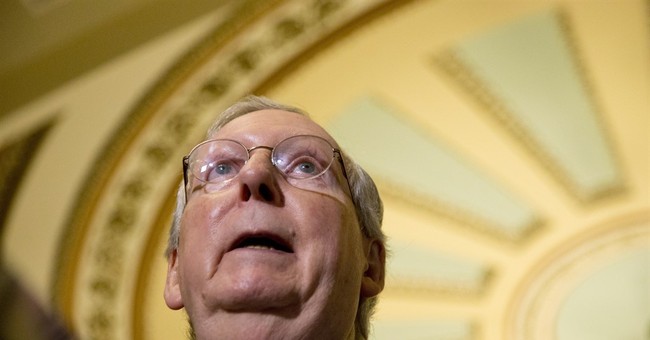 Senate Majority Leader Mitch McConnell sounds awfully downhearted if you ask him whether he'll still have his job next year.

“I may or may not be calling the shots next year,” McConnell told a civic group in Louisville, according to The Associated Press.

Does McConnell's admitted doubt speak ill of Donald Trump's campaign? The Senate leader hasn't exactly been the GOP nominee's greatest surrogate. He has called the candidate out for some of his more controversial remarks, like plainly telling him he was "wrong" on NATO. The senator also recently said neither Trump nor Hillary Clinton are "appealing" to Americans. Yet, he rejected the idea that Trump's nomination is what will prove to be the deciding factor for the Senate. The party would be fighting to retain control regardless of who is running for the White House, he said.

The statistics corroborate his assumption. Two dozen GOP seats are on the ballot this year, while the Democrats have only 10 contests to fight.

Still, is the best tone to take in an important election year? Wouldn't it be more apt for the GOP leadership to be exuding a winning mentality?

Confirmed: The Obama DOJ Went Rogue to Spy on an Ex-Trump Campaign Official
Matt Vespa
Where Did All of These Haitians Come From and Why Are They at the Border Now?
Julio Rosas
Tim Scott Slams Dems For 'Walking Away' From Police Reform Negotiations
Reagan McCarthy
Reports: Taliban Hunting Down US Allies, Persecuting LGBT Afghans, Repressing Women