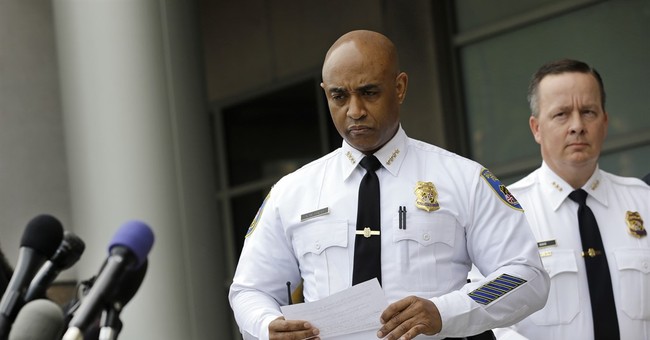 The newly released Department of Justice report into its investigation of the Baltimore police force finds the officers guilty of excessive force and discrimination.

The report, the culmination of a yearlong investigation into one of the country's largest police forces, also found that officers make large numbers of stops — mostly in poor, black neighborhoods — with dubious justification and unlawfully arrest citizens for speech deemed disrespectful. Physical force is used unnecessarily, including against the mentally disabled, and black pedestrians and drivers are disproportionately searched during stops, the report says.

The DOJ found that police were stopping black residents at a disproportional rate (84 percent of stops) and routinely performed unconstitutional public strip searches.

The probe comes after a young African American man named Freddie Gray died in police custody last year after failing to be properly secured during police transport. His death sparked violent protests throughout the city and prompted Baltimore State Attorney Marilyn Mosby to pursue criminal charges against the officers involved. Most of the officers were acquitted after facing their individual trials until Mosby dropped all charges last month.

Nevertheless, in the wake of the DOJ report, Baltimore Mayor Stephanie Rawlings-Blake revealed some changes the city will be implementing at a press conference on Wednesday. They are now training officers on 26 new policies, she explained, as well as encouraging officers to engage in the community and create a level of transparency. They are also investing in technology to “modernize” the police department. For instance, to prevent another tragic Freddie Gray incident, they are “retrofitting transport vans” to ensure passengers are safe during the drives, as well as adding recording cameras inside the vans.

“We have a very long journey ahead of us and I’m grateful we can begin the process of meaningful change,” Rawlings-Blake said.