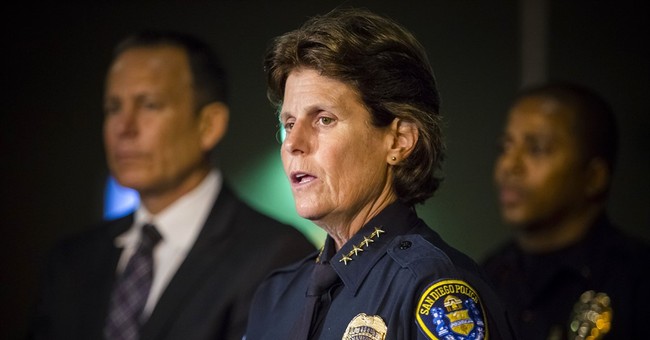 San Diego Police Chief Shelley Zimmerman updated the press on Friday about the tragic shooting Thursday night that took the life of one of the police officers on her force.

This is a “heart wrenching” situation for officers to go through, Zimmerman said when she opened her remarks. An investigation is underway to seek to find answers to the “senseless murder.”

Fallen officer Jonathan DeGuzman was a 16-year veteran of the police department and a husband and father of two young kids. Sadly, his family is left to mourn.

Zimmerman did offer a bit of good news, however. Although the second officer, Wade Irwin, is still in serious condition, he is expected to survive the attempt on his life.

It is not clear yet, Zimmerman explained, whether this was a vehicle stop or a pedestrian stop. The investigation will determine those details “with certainty.” Nor does her team know whether this was yet another instance of a police ambush.

They do know that the suspect is a Hispanic male adult, currently in custody in critical condition. His identity will not be released until the investigation moves further along.

The investigation is likely to last the next several days, Zimmerman said.