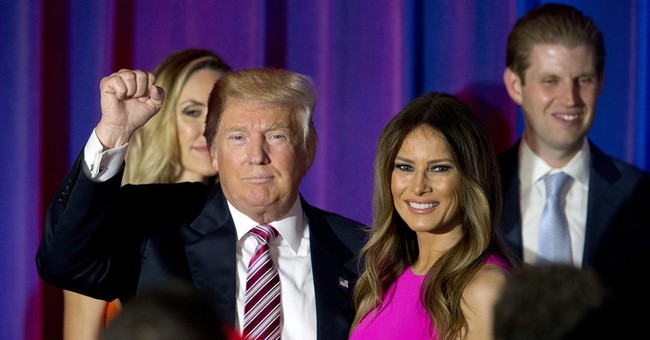 In an unusual change of pace, Donald Trump was a man of few words on Monday night on the RNC convention stage. Instead, he handed the limelight to his wife, Melania, introducing her as "the next first lady of the United States."

“You have all been very kind to Donald and me, our son and our whole family,” Mrs. Trump told the convention crowd.

The audience returned the warm welcome with shouts of “We love you!”

“I’m so proud of your choice for president of the United States, my husband Donald J. Trump,” Mrs. Trump continued. “I can assure you, he’s moved by this great honor.”

Melania has known Donald for 18 years and in that time she’s been aware of his love for this country, she noted.

“He never had enough on his agenda when it comes to his patriotism,” she said. “Like me, he loves this country very much.”

She later added he has been concerned about it for just as long.

Melania offered some insight into her upbringing. Born in Slovenia, she gained a passion for business, travel, and the value of hard work from her family. She soon applied those lessons to start an impressive career in the world of fashion that eventually brought her to New York City. On July 28, 2006, she experienced “the greatest privilege on planet Earth” – becoming a citizen of the United States.

Mrs. Trump suggested she would return the favor as first lady. One of her many causes, she said, is helping children and women, with a particular focus on education.

“We want our children in this nation to know the only limit is the strength of your dreams and your willingness to work for them,” she said.

“I cannot take the freedoms for granted,” she insisted, but noted these freedoms have come with a price. At this point, she took a moment to recognize veteran and former senator Bob Dole, who was sitting in the front row with some of the Trump family members.

“We are all truly blessed to be here,” Melania said after thanking all of the nation’s vets.

Mrs. Trump also took a few moments to impress upon the crowd that they have picked a fighter in Donald Trump.

“Donald has a determination and never give up attitude,” she said.

“I’ve seen him fight for years to get a project done, and he does not give up,” she explained. “If you want someone to fight for you and your country, I can assure you, he’s the guy. He will never give up and most importantly, he will never let you down.”

“No more room for small thinking,” she continued. “No room for small results. Donald gets things done. Our country is under performing and needs new leadership.”

Pushing back against attacks on her husband that have painted him as bombastic, greedy and selfish, Mrs. Trump insisted he has a kindness not often portrayed in the media.

“Donald wants prosperity for all Americans,” she said, noting that he intends to usher in new programs to help the poor and new opportunities to challenge the young.

“Donald is an amazing leader,” she said. “Now, he will go to work for you.”