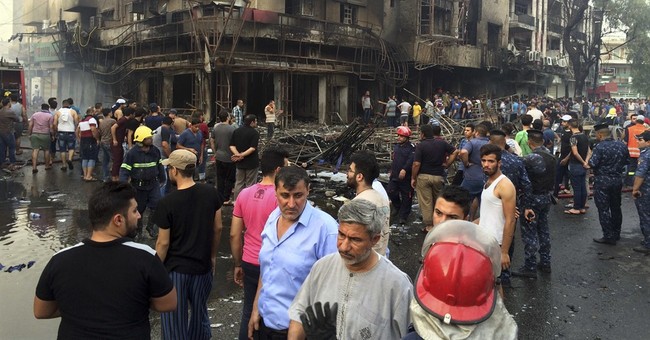 UPDATE: BBC and CNN are now reporting the death toll has risen to 126.

A car bomb has exploded in a shopping center in Karrada, Baghdad on Sunday, killing over 90 people that were shopping during Ramadan and injuring over 100 others, BBC reports. ISIS has claimed responsibility.

A car bomb exploded near a restaurant and shopping area in the central district of Karrada late on Saturday.

The street in the mainly Shia area was busy with shoppers in the holy month of Ramadan, which ends this week.

Iraq's Prime Minister Haider al-Abadi was met by angry crowds while visiting the scene of the blast on Sunday.

A second bomb also exploded at about midnight in a predominantly Shia area north of the capital, killing another five people.

The attack comes just a week after Iraqi forces recaptured the major city of Fallujah from the terrorists.

Many of the victims were children.

This image appears to contrast the devastating before and after of the Baghdad shopping center following the bombing.

This picture is painful!
May the souls of #Baghdad bombs victims rest in peace. pic.twitter.com/oGLgRsrPFF