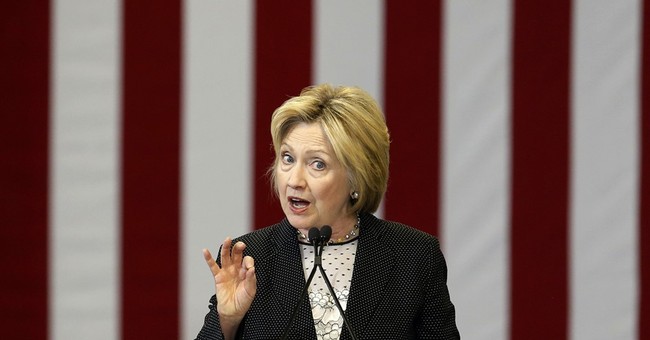 Hillary Clinton did not directly respond to Donald Trump’s forceful speech on Wednesday morning, where he called out her failed foreign policy record and questioned her temperament, but she did reiterate how disastrous he’d be for the American economy.

“Donald Trump offers no real solutions to the economic challenges we face,” Clinton said. “He just continues to spout reckless ideas” that will cause another economic crash.

“I’m here to offer an alternative,” she continued. “We need to make sure our economy works for everyone.”

Trickle down economics has been proven wrong again and again, she argued.

Twice now in the past 20 years, a Republican has caused an economic mess and a Democrat has had to come in and clean it up, she argued.

To cut taxes on the wealthy we need to invest in our future, she suggested.

Some of the ways Clinton intends to "invest in the future" include ushering in paid family leave, raising the national minimum wage, advance manufacturing and making college debt-free for all. She also said she will make sure that “Wall Street corporations and the super rich pay their fair share of taxes” – always a popular liberal applause line.

Clinton also promoted comprehensive immigration reform, arguing it will "bring millions of workers into the formal economy so we don’t have an unlevel playing field."

A few of her other proposals included strengthening the collective bargaining rights of labor unions, “slapping” exit taxes on corporations trying to move overseas, and making America a clean energy superpower to create jobs and help protect our planet.

Her pledge to usher in equal pay for women, however, garnered the loudest cheers.

Later in her remarks, Clinton proved she wasn't quite done with painting Donald Trump as unfit for the presidency. After slamming Trump for voicing countless conspiracy theories and pushing back at his attacks on the Clinton Foundation, she argued he has a history of taking advantage of Americans for business reasons.

"Donald Trump uses poor people to produce his line of suits and ties," she said.

Interesting, since he said the same thing about her hours earlier.

This New Peer-Reviewed Article Could Be a Game-Changer
Townhall
'Parents' rights' a centerpiece of a GOP that is increasingly hostile to public education and democracy
Twitchy
Trump Makes It Clear He's Running, Lights up Georgia Rally on Biden, Durham and the Audit
Redstate
It Gets Worse: Look Who Worked Together to Frame Donald Trump With Fake Russia Hoax
PJ Media