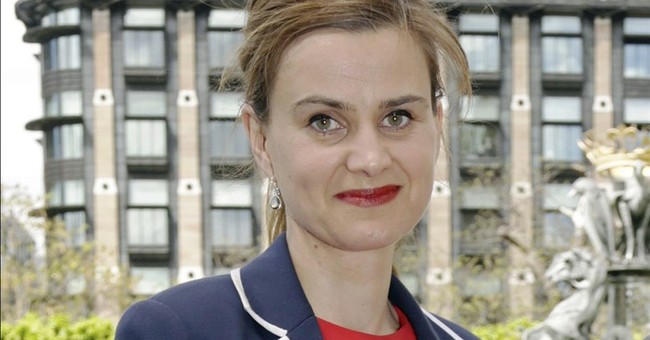 Update: In light of Thursday's tragedy, EU referendum campaigns are being suspended. All political events for Friday have been cancelled.

The death of Jo Cox is a tragedy. She was a committed and caring MP. My thoughts are with her husband Brendan and her two young children.

Update: The suspected attacker has been identified.

The man arrested after Labour MP Jo Cox was repeatedly shot and stabbed has been named locally as Tommy Mair, a local man from Birstall where the attack took place.

Update: Cox is in critical condition. The shooter reportedly shouted "Britain first!" during the attack, according to The Telegraph.

Police did not reveal details on a possible motive. Cox wrote an editorial last week for the Yorkshire Post opposing the so-called "Brexit," ahead of the referendum vote scheduled for June 23.

She also has made finding a solution to the Syrian civil war a top priority and has been critical of Britain's reluctance to deepen its military involvement against Islamic State terrorists as part of that effort.

British Parliament member Jo Cox, a Labour Party politician, has been shot and stabbed at a library in Northern England, reports The New York Times.

The police were called to Birstall, a village about six miles southwest of the city of Leeds, at 12:53 p.m., according to a statement by the West Yorkshire Police. The officers found that “a woman in her 40s had suffered serious injuries and is in a critical condition.”

She was taken by an air ambulance to Leeds General Infirmary, and armed police officers were posted outside the hospital.

The motive for the attack is still unclear.

Utterly shocked by the news of the attack on Jo Cox. The thoughts of the whole Labour Party are with her and her family at this time.