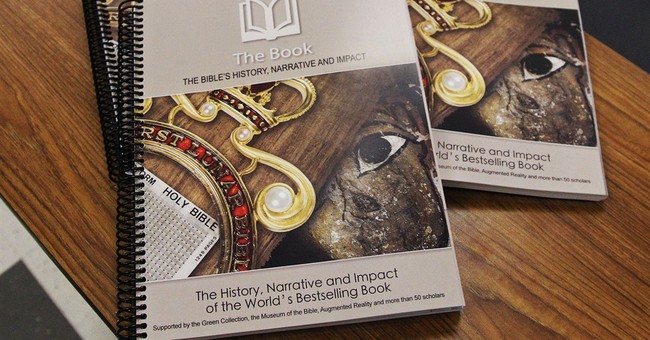 “This is not your grandmother’s museum,” Pastor Rick Warren said at an event to preview the upcoming Museum of the Bible in Washington, D.C. One look at the blueprints for the ambitious six-story gallery justifies his description.

The Museum of the Bible will give the Holy Book some prime real estate in the nation’s capital come fall 2017. The museum’s director of community relations, Shannon Bennett, offered me a tour of the construction site in April and filled me in on how the innovative designs will come to life. In a separate conversation with the museum’s president, Cary Summers, I learned how the site’s historical offerings and technological advances will attract all generations.

Construction site of Museum of the Bible, just off the National Mall.

Steve Green, the Christian CEO of Hobby Lobby, conceived the idea for a Bible museum in 2009. He founded a museum board and soon amassed an impressive collection of biblical artifacts. For five years, the organization took those treasures on the road in traveling exhibits both in America and around the world.

“We didn’t want to wait until the site was built to show people,” Bennett explained.

Visitors were intrigued, spending an average of four and a half hours learning and studying the collection.

After the success of the traveling exhibits, the result is a massive structure just off the National Mall.

As of today, Museum Of the Bible has acquired over 42,000 artifacts and is ready for a permanent home. The museum will feature items from the time of Abraham until the present, including 1st edition Bibles, fragments of the Dead Sea Scrolls and a handwritten letter from Thomas Jefferson about the relationship between church and state.

“That’s like having 20 kids and trying to pick which one’s the favorite,” he said.

But, he is confident that the collection will fascinate people of all ages.

“It will attract people who have no faith, faith in various traditions,” Summers said. “Our approach is to present the Bible and allow people to draw their own conclusions. We think well over 100 countries will be visiting every year so we have to make it very interactive.”

The museum covers a space of 430,000 square feet and none of it goes to waste.

“It’s bigger than the Air and Space museum in size,” Summers explained. “It’s difficult to grasp the size it. There’s no dead space. I don’t think they’ll be disappointed.”

The main entrance, Bennett pointed out to me, will display text from Genesis 1 in the Gutenberg Bible. On the side of the door will be passages from Psalm 19.

The inside will be just as impressive.

Three of the museum’s six floors will feature themes. The Impact Floor, a favorite of the museum’s curators, will prove to visitors that the Bible is as relevant today as it was when it was first written, featuring displays like “Bible in America.” For example, did you know Bible themes are present in U2’s music? How about the Superman films?

For the tweeting Millennials, Bible Now will allow them to enjoy an aggregation of what social media users are saying about the Bible online.

Walking up the stairs, you’ll come to the Narrative Floor, which will provide guests with the stories of the Bible in a host of different presentations. All of the materials will be presented sans interpretation, Bennett was important to note.

“There’s no theology at all,” Bennett said. “We wanted to cast a broad net.”

Keep climbing and you’ll reach the History Floor, which will showcase archaeological discoveries and over 500 artifacts. A few of the items to be presented include writings from the time of Abraham, fragments of the Dead Sea Scrolls and early New Testament writings, according the museum’s website.

A few other areas of the massive museum deserve to be noted. The Demonstration lab will show visitors the tools they use to study the Bible’s text, such as DNA testing to examine the ink.

The museum is topped off with a theater, which will offer a space for live plays. The stage will be surrounded by a garden and a restaurant called Foods of the Bible, which will feature more than just hummus and pita, Bennett promised.

The future top floor of Museum of the Bible, which will feature a live theater and views of downtown D.C.

In conjunction with these displays are new technologies that will enhance the visitor’s experience.

These devices, he said, offer a pre-programmed tour with five levels of learning that will help customers manage their time. It even tells them how long to stand in front of each section.

That’s a handy tool, considering it would take nine 8-hour days to get through everything, Bennett said.

The museum’s main message, I gathered, is that in today’s culture, Bible references aren’t only limited to church pews. As Museum Of the Bible will reveal, Bible themes are in the movies we see, the songs we sing, and the books we read. In other words, they're hidden in plain sight.

The building of the biblical masterpiece, you’ll be happy to know, is right on schedule.