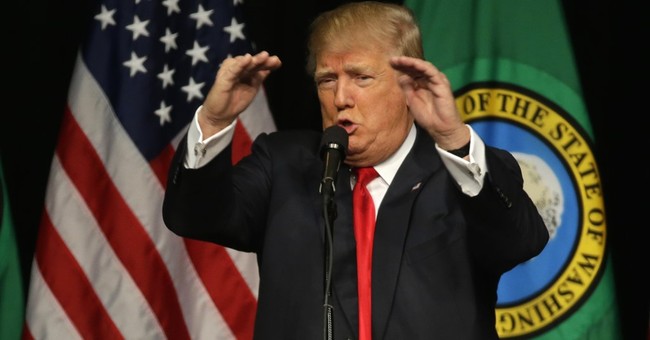 Donald Trump is not popular with Hispanics, poll after poll has shown. His now infamous remarks on illegal immigration and promise to build a wall, which kicked off his presidential campaign, have done wonders with some conservatives, but badly damaged his image with Latinos. That doesn't mean he's going to just give up on the demographic. In his first address to a Latino audience, Trump will be sending a pre-recorded videotaped message for a group of Hispanic evangelicals at the National Hispanic Christian Leadership Conference this weekend.

Trump aides have told the National Hispanic Christian Leadership Conference that the presumptive Republican presidential nominee will submit videotaped remarks to be played at their annual conference this weekend in California. It's one of his most overt moves to date to repair the damage he has done with members of the crucial Latino voting bloc, many of whom have bristled at Trump's past name-calling, stereotyping, and calls to deport undocumented immigrants.

To be fair, Hillary Clinton is also submitting videotaped remarks. She, however, doesn't have so high a hill to climb with Hispanic voters.

We don't yet know what Trump will say in the video, but Reverend Samuel Rodriguez, president of the leadership conference, said he hopes the presumptive GOP nominee can "redeem the narrative with Latinos" - people of faith, in particular. Indeed, Trump reaching out to evangelical Hispanics is perhaps a smart campaign move, considering this specific demographic tends to hold more conservative views.

Brent Wilkes, the national executive director of the League of United Latin American Citizens, noted it's "encouraging" the Trump campaign is reaching out to Hispanics, but he's eventually going to have to meet face-to-face with the community he's been "denigrating."

Spencer Brown
Will General Milley Be Remembered as One of 'The Men Who Broke the Military?'
Katie Pavlich
Why the Biden WH Is Still at War with Border Patrol Even After 'Whips' Story Was Exposed as Fake News
Matt Vespa
Taliban Wastes No Time Returning to Barbaric Ways
Spencer Brown
A Surprising Number of Republicans Supported Requiring Women Register for Draft