Cruz Applauds Netanyahu For Vowing to Never Give Up Golan Heights 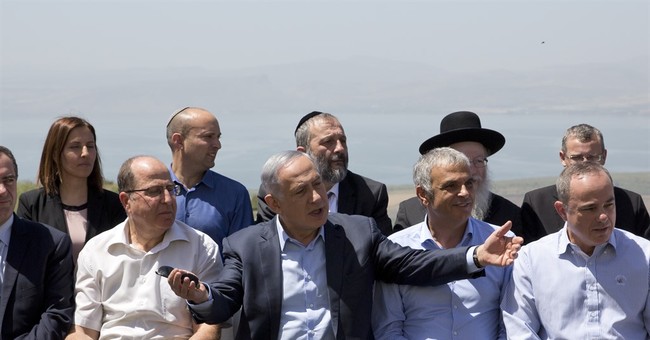 Israeli Prime Minister Benjamin Netanyahu has spoken: The Golan Heights are not for sale.

“The time has come after 40 years for the international community to finally recognize that the Golan Heights will remain forever under Israeli sovereignty,” he said.

Whatever the outcome of the peace talks, he added, “the border will not change.”

In other words, all parties participating in the Geneva talks can go home.

Netanyahu made the above remarks before a cabinet meeting near the Syrian border on Sunday. It was a day after he met with U.S. Secretary of State John Kerry and told the American official that Syria will never return to its pre-war state, before it became a terrorist haven. Hence, the need to keep Golan Heights under Israeli control.

Israel acquired the Golan Heights during the 1967 Six-Day War and annexed the territory in 1981, expanding Israel civil law into the territory. Yet, many international players, including the U.S., have refused to recognize it as Israeli property.

Shortly after Netanyahu made his bold statement, Republican presidential candidate Ted Cruz applauded him, saying in a new statement:

"Today, the government of Israel reiterated the reality that the Golan Heights are part of Israel's sovereign territory. Given the presence of hostile terrorist organizations ranging from ISIS to Hezbollah on Israel's northern border, it is foolhardy and dangerous for elements in the international community to try to pressure Israel to abandon the Golan to the chaos engulfing Syria. The path to peace cannot involve Israel's abdication of its own security.

"I applaud Prime Minister Netanyahu's courage in standing up for the safety of his people. America stands with you."

The Syrian government has a much different view than Netanyahu and Cruz. Deputy Foreign Minister Faisal Mekdad, for instance, insisted Syria will retake the region by force if they have to.

Israel has faced hundreds of terror attacks in the past few years. Palestinian terrorists have been stabbing Israelis, while Iran has been vowing to destroy Israel. Recently, Israel found a Hamas tunnel stretching from Gaza, clearly meant for terror acts. On Monday, terrorists celebrated a bus bombing in Jerusalem that injured over 21 innocent people.

It's no wonder Netanyahu is so apt to prevent terrorists from gaining more influence in the region.