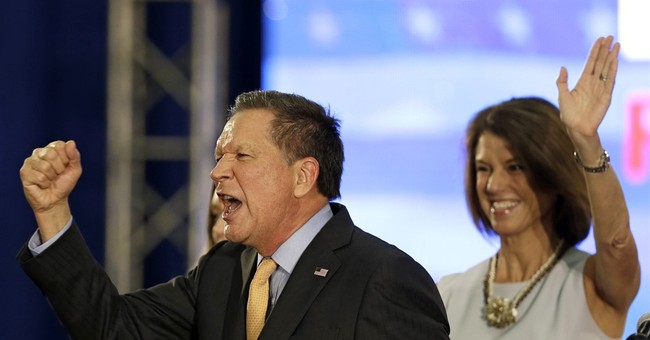 Gov. John Kasich may have won his home state of Ohio Tuesday night, but his remaining competitors say he has no business staying in the presidential race. If you ask Donald Trump and Ted Cruz, they’ll tell you Kasich is nothing more than a nuisance.

At his victory party following last night’s primary results, Cruz announced he is more than ready to face Trump on his own. He and Trump are the only candidates with a plausible path to the nomination, he said - a notion fully supported by his team of advisers.

“There is virtually zero chance he can even be nominated,” Saul Anuzis, a former Michigan Republican national committeeman who’s advising Cruz on his convention strategy, told POLITICO. “It’s a two-man race.”

Certainly, the math is on their side.

Their confidence is rooted in the fact that Trump and Cruz are nearly certain to control the lion’s share of the 2,472 delegates participating in the July convention. Together, they’ve earned more than 1,000 delegate slots to Kasich’s 136. And those delegates will ultimately approve the rules that govern a contested convention.

Cruz insisted that if Kasich stays in the race he will only help Trump. He and his team will do everything they can, therefore, to prevent the governor from reaching the July convention.

Trump’s team has also indicated they will not change any convention rules to get Kasich's foot in the door.

Some pundits like David Limbaugh see Kasich as the GOP's new Ralph Nader. He likens Kasich to a “selfish sideshow” and is urging him to end this “charade.”

Excluding Kasich, there are now 3 groups, Trump, Cruz, & neither. “Neither” either helps Cruz or elects Trump. Kasich is a selfish sideshow.