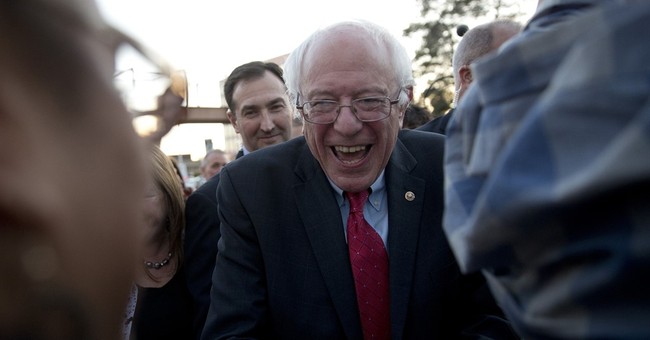 Hillary Clinton may not want to read the news this morning. A new Associated Press-GfK poll finds that Democrats are warming up to the idea of her foe Bernie Sanders as their nominee.

A greater percentage of Democratic registered voters view the Vermont senator as likable, honest, competent and compassionate than they did just two months ago, according to a new Associated Press-GfK poll. Seventy-two percent now believe he could win the general election, a 21 percentage point increase from the last time the survey was conducted in December.

Hm. Hillary is not so inevitable after all.

Then came this poll from the Washington Free Beacon, which shows Sanders leading Clinton in Colorado by 6 percent, shattering her initial 28-point lead.

You may be wondering about the validity of the Colorado survey, as Rachel Maddow would. The MSNBC host was offended earlier this week about a separate WFB poll showing Clinton and Sanders running neck-and-neck in Nevada. Yet, Matt detailed how the survey was conducted in an unbiased and professional manner. Moreover, the numbers were corroborated by a CNN poll revealing more of the same: Sanders has caught up to Clinton in the Silver State.

Sanders has been underestimated since he started his 2016 campaign. While he was probably nothing more than an afterthought for the Clinton camp even just a few months ago, he is now their worst nightmare.

Sanders and Clinton have both won one contest. The Nevada caucus will be held Saturday to break the tie.

I Know Exactly Who Is To Blame for This New Wave of COVID-19, and I Know Who Is Making a Fortune on It
Townhall
'Persuasion requires people TRUST YOU': Brutal thread explaining why govt. messaging to the vaccine-hesitant sucked and STILL sucks a must-read
Twitchy
'Science' Burns Its Credibility to the Ground and Vindicates Republicans Along the Way
Redstate
A Day in the Life of a Low-Information Voter
PJ Media