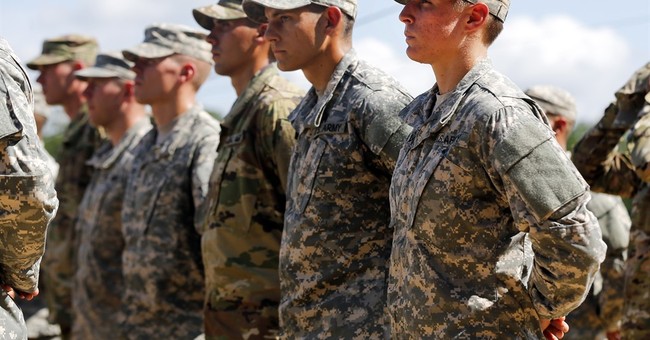 When asked if women should be required to sign up for the military draft at last weekend’s GOP debate in New Hampshire, several candidates voiced their approval. After all, the military has opened all combat roles to women.

Following the debate, Sen. Ted Cruz disagreed with his rivals. He called the proposal “nuts.”

Lt. Gen. (US Army-Ret.) William "Jerry" Boykin appears to agrees with the Texas senator. Boykin, the executive vice president of the Family Research Council, sent an urgent email to supporters on Tuesday noting how concerned he was after last weekend’s GOP debate. He said the new proposal to make women sign up for the draft proves that the military is being used as a social experiment.

Everyone in the military knows that once in, you don't get to choose where you will end up serving. As the current administration has made abundantly clear, the U.S. military is now operating as a testing ground for social change -- at the expense of military readiness. As combat infantry and Special Forces specialties are opened to women, it only follows that if a draft should occur, conscripted women would inevitably be placed in units where the mission is to find and engage the enemy, including hand-to-hand combat.

For some peace of mind, Boykin urged the current presidential candidates to sign the following pledge.

I, the undersigned, urge you to reject mandatory registration for selective military service for women. It is unconscionable that we would even contemplate forcing our daughters to be put in in harm's way against their will. The women in our military have a long history of excellent service as volunteers. Should a draft occur, there is no need to conscript our women into service that would ultimately include infantry and Special Forces. The current national discussion on the issue places a liberal social agenda over and above military readiness and respect for the value of America's young women. Don't draft our daughters. I urge you to reject required selective service registration for all American women.

Boykin is perhaps convinced Cruz will sign it. He endorsed the Texas senator Thursday, according to Cruz's campaign.

“The next President will appoint three Supreme Court Justices,” Lt. Gen. Boykin said. “I want Ted Cruz to do that. He is a man of character, integrity, and courage.”

Other politicians are drawing attention to the issue. Sen. Mike Lee (R-UT) is expected to introduce a bill that would block women from registering for the Selective Service. His reason was personal.

“I do not want to see my 15-year-old daughter drafted into the military,” the Utah senator told CNS News.

Army Chief of Staff Gen. Mark Milley and Marine Corps Commandant Gen. Robert Neller disagree. Both are fully supportive of women being included in the draft.

“Every American who’s physically qualified should register for the draft,” Neller testified during a Senate Armed Services Committee hearing.

What do Americans think?

A Rasmussen Reports poll released Wednesday found that a majority of women—52 percent—oppose being required to register for the draft. Thirty-eight percent support enrollment, while 10 percent are undecided.