Donald Trump Jr. At Caucus Site: My Dad Walked Out on Fox Because ‘He Isn’t Going to Be Pushed Around By Anyone’ 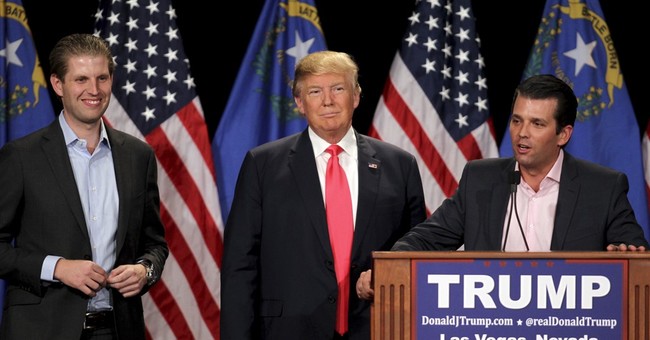 WEST DES MOINES, Iowa - West Des Moines’ Precinct 313 had a surprise speaker at Monday night’s caucus. After several caucus goers made their respective cases for their candidates, Donald Trump, Jr. arrived to claim the service for his dad.

After speaking with Iowans all week, Trump Jr. learned that people are excited to vote for him because he’s “not afraid to speak his mind.”

Case in point: When he walked out on last week's Fox News debate. That decision, Trump Jr. argued, proves that “he’s not going to be pushed around by anyone.”

He said his dad would be just as forceful in Washington and will “cut all the nonsense” in regards to waste and fraud.

Trump Jr. got a bit personal when sharing the values his dad instilled in him and his siblings.

That, he said, is why his dad has been giving back.

As for the stereotype that his dad is too rich to relate to everyday Americans, Trump Jr. offered an emotional retort.

“He’s still a blue collar guy at heart,” he said. “He wants to have a cheeseburger and watch football like everyone else.”

Trump Jr. gave some examples, sharing how his dad has hired construction workers who did not have higher education.

“He saw something in those people and he gave them a chance,” he said.

Although Trump has no political experience to tout in his quest for the White House, his well-spoken son urged Iowans to give his dad the same opportunity.

“No one loves this country more than him,” Trump Jr. insisted.

“His message is coming through.”

Trump ended up with the second highest number of votes at this caucus site, tallying 54 votes. Marco Rubio came in first with 71 and Ted Cruz snatched third with 24 votes.