White House: Timing of Claims Payment to Iran Is 'Not a Coincidence,' But It's Not Ransom 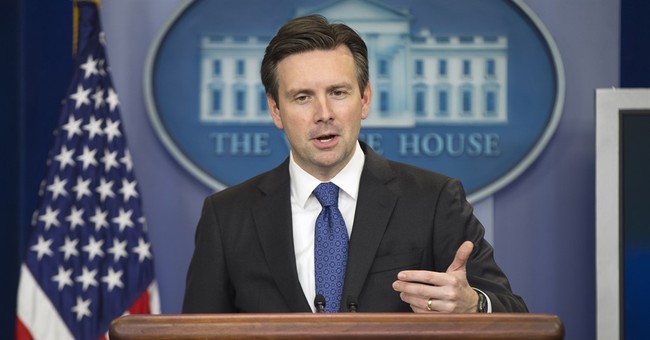 While our country celebrates the release of five American prisoners in Iran, some are likewise questioning the methods the White House used to secure their return. Judging by the timing of the $1.7 billion the U.S. sent to Iran – the same day that Iran agreed to release the Americans – the White House’s critics seem justified in their suspicions that it amounts to a ransom.

White House Press Secretary Josh Earnest was asked Tuesday whether there was any truth to those misgivings. He insisted the money amounted to nothing more than an outstanding claims payment.

The corresponding timing of the claims payment and hostage release "is not a coincidence" Earnest said, but also does not represent a ransom payment. It's a sign of "deeper diplomatic engagement" that is allowing the two capitals to close the books on unresolved issues, Earnest said.

Trying to distance the White House from any wrongdoing, Earnest continued to say the payment was a “very good deal for taxpayers.”

The Obama administration’s unsteady relationship with Iran has led to a dangerous nuclear agreement that Israeli Prime Minister Benjamin Netanyahu said would only pave the way for Iran to develop a nuclear bomb. In an editorial published on Tuesday, GOP presidential candidate Sen. Marco Rubio slammed the White House's "deeply flawed" relationship with Iran and insisted the nation will only respond to pressure.

Four of the five Americans released from Iran this past weekend escaped as part of a prisoner swap that was the result of 14 months of private meetings. The deal allowed seven Iranian prisoners in the U.S. to go free who had been accused of violating sanctions. Analysts like Dr. Sebastian Gorka from the Marine Corps University summarized the swap as such:

"We gave away the farm for a Starbucks gift card.  We sent a very clear message that this nation (Iran), which is the greatest state sponsor of terrorism for the last 30 years, has carte blanche," Dr. Gorka said.

"We've sent a message 'Iran, you can get away with murder' literally Sean," he said.

Frustration with Washington’s foreign policy was exacerbated last week after 10 U.S. Navy sailors were taken into custody by Iranian authorities. Embarrassing propaganda footage even captured Iranians forcing the sailors to their knees at one point.

Secretary of State John Kerry thanked Iran for their hospitality and the incident didn’t even merit a mention during the president’s State of the Union address.

We need to show more fortitude in our relationship with Iran. No longer can we allow them to be the bully.