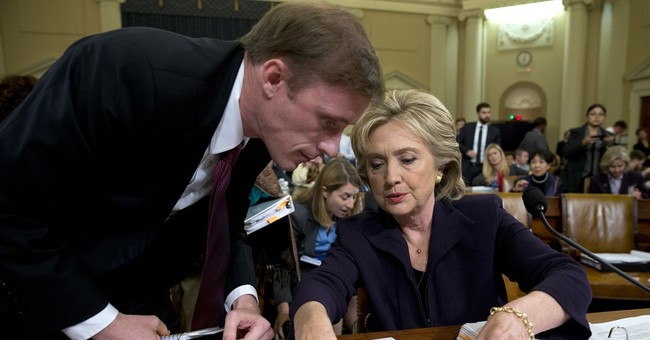 You might recall Brian Pagliano, Hilary Clinton’s former IT staffer during her time as Secretary of State, who was charged with maintaining her private server. You know, the one who pled the Fifth so he wouldn’t have to face to Senate Judiciary Committee. Like his boss, Pagliano is again escaping any accountability because the State Department can’t seem to locate his emails.

Politico has obtained a letter that Committee Chairman Chuck Grassley sent to Secretary of State John Kerry, informing the latter that correspondence from Pagliano during his time working for Secretary Clinton was mysteriously missing. The frustrated chairman laid out the committee’s demands from the thus far uncooperative State Department:

While Grassley waits for a response, the State Department has confirmed that, although they have found emails from the period after Clinton left State, there’s a big question mark during the time he Pagliano had to answer to her:

Red flags all over the place.

Here we have Clinton, who insists her dangerous use of a private server, which placed America’s national security at risk, is not even worthy of a headline, and Pagliano, who won’t even answer questions about the scandal. I guess maintaining public trust isn’t high on their to-do list. Will the issue return to the spotlight as Clinton seeks to gain the Democratic nomination?

Grassley is trying to determine whether to grant Pagliano an immunity in exchange for his testifying about Clinton’s private server. This latest revelation is not helping the IT staffer’s case.