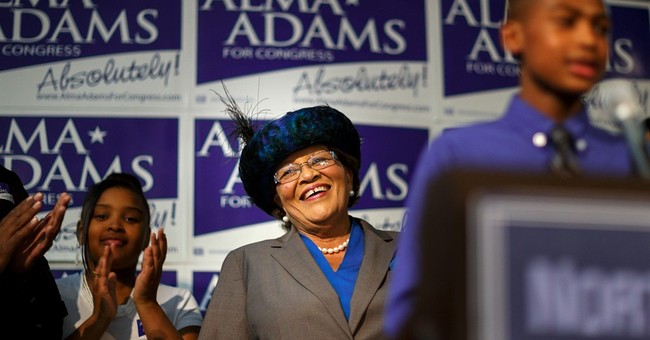 At a tragically ironic press conference Monday afternoon on Capitol Hill, the Congressional Black Caucus praised the work of Planned Parenthood. Joined by former Planned Parenthood patients, Reps. Gwen Moore (D-WI), Alma Adams (D-NC) and Donna Edwards (D-MD) defended the organization as vital to women's health. Not of interest during their conversation, was the fact that Planned Parenthood Founder Margaret Sanger was a racist, nor the Center for Medical Progress investigation that has shocked Americans with its disturbing footage of employees joking about the sale of fetal body parts.

Nope, these concerns were of no consequence. Rep. Adams seemed quite positive that the GOP attempt to defund Planned Parenthood was based off of a misogynistic agenda.

"Attacking Planned Parenthood is an attempt to roll back the clock to the early 1900's. I saw them do this in NC." @RepAdams #standwithpp

As for the Planned Parenthood patients who were present, they shared stories about how the organization provided important breast cancer screenings and prenatal care. Again, the fact that the organization performs over 300,000 abortions annually and abortion is the source of 37 percent of its revenue was not even a footnote.

Surely, the same services these women sought can be accessed at the thousands of health centers across the country that do not perform abortions. Pro-life Republicans are leading the charge to defund Planned Parenthood and reallocate those tax dollars to these alternative, more humane, resources available to women.

You wouldn't know that if you attended today's presser. All these congressmen want to do, Rep. Adams declared, was to "make decisions" for women.

.@RepAdams says she's here as an "angry black woman who's tired of politicians trying to make decisions" for women. #StandWithPP

Thankfully, it looked like the event was sparsely attended.

The African-American legislators' cheerleading for Planned Parenthood is especially tragic considering the abortion giant is responsible for 35 percent of abortions among black women.

At least one African-American Democat, Bill Patmon, wasn't afraid to tell it like it is at a pro-life rally in Ohio earlier this summer.

Tuesday morning, the House Oversight Committee will hear directly from Planned Parenthood CEO Cecile Richards as she tries to do the near impossible: convince Congress why she still deserves taxpayer dollars.