Graham Shows Fire at JV Debate, Gets Into Heated Exchange with Santorum Over Immigration 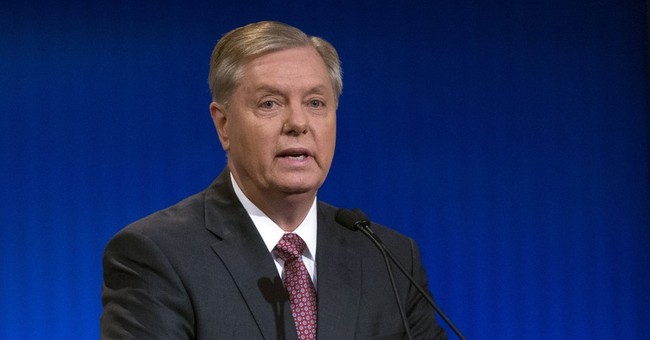 Gov. Jim Gilmore (R-VA) didn't meet CNN's criteria and Gov. Rick Perry (R-TX) suspended his campaign, yet being short two people doesn't mean there still weren't plenty of fireworks at the "JV" debate tonight at the Reagan Library in Simi Valley, California. In what may come as a surprise, many of those fireworks came from Sen. Lindsey Graham (R-SC). Here is just a snippet of how he and the other three candidates, Gov. Bobby Jindal (R-LA), former Gov. George Pataki (R-NY), and former Sen. Rick Santorum (R-PA) fared.

Jindal: Jindal’s most powerful remarks centered on immigration and religious freedom. Although Santorum accused the governor of supporting amnesty, Jindal insisted, “I am not for amnesty. I will never be for amnesty.” He then shared his plans to rein in illegal immigration:

“We need to secure the border, period,” he said. “As president, I’ll get it done in six months…A smart immigration makes our country stronger…Immigration without assimilation is invasion.”

The governor of Louisiana also weighed in on the delicate status of religious freedom in America:

“I want the left to give us a list of jobs we’re allowed to have.”

One of Jindal's last declarations was on behalf of the pro-life movement, saying it is time to “get rid of the Republican Party” if we can’t defund Planned Parenthood.

Graham: Sen. Graham had a surprising amount of passion tonight. He was much more exciting than during the Aug. 6 debate, where he failed to inspire. Tonight he was more convincing that he wants to be president.

The senator repeated his plan to send more ground forces into Iraq to defeat ISIS and at one point got into a heated sub debate with Santorum over immigration.

Graham accused Santorum of not having a plan to deal with the immigration issue.

“The fact of the matter is, I did have a plan,” Santorum responded. “In 2006 I introduced the Comprehensive Border Security bill.”

Watch how the rest of that sparring contest unfolded below:

Graham also had this message for former Secretary of State Hillary Clinton:

“Where the hell were you on the night of the Benghazi attack?”

Pataki: Pataki reminded viewers that he espoused the kind of leadership New Yorkers needed to overcome the tragedy of 9/11. He also proved to be another boxing partner with Sen. Santorum over the Kim Davis controversy. Davis, a county clerk in Kentucky, refused to issue same-sex marriage licenses after the landmark SCOTUS decision Obergefell v. Hodges because it violated her religious beliefs. She was sent to jail for her resistance. Pataki took the side of the rule of law, saying he would’ve fired her if she worked for him. He got applause for the comment.

Santorum: Santorum spoke directly to his social conservative base tonight to defend American’s freedom of conscience. How many people are we going to throw in jail for violating their faith? he asked. “Is there not room in America?”

He said the Supreme Court overstepped its bounds in declaring same-sex marriage a national right.

“What the Supreme Court did is against God’s law.”

He also reminded the audience more than once that he was a leader in the ban on partial-birth abortion.

Stay tuned for coverage of the top-tier debate tonight at 8 p.m.