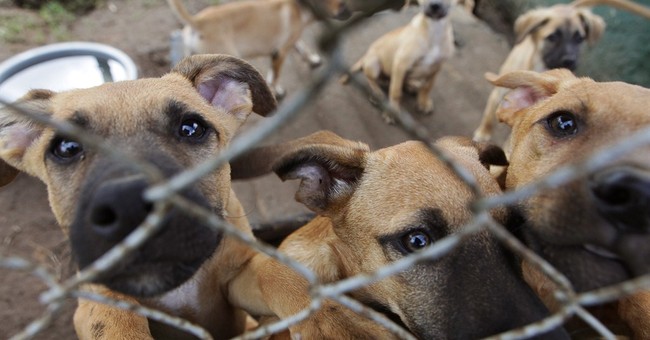 During last weekend’s Oscars, one particular commercial that aired featured young animals somberly saying things like, “I’ll never learn to fetch” and “I won't ever get to play with my best friend.” Why? Because “PETA killed me.” The seemingly strange spot, produced by the Center for Consumer Freedom, was a spoof on the laughably bad Nationwide Super Bowl commercial earlier this month and was designed to expose People for the Ethical Treatment of Animals’ hypocrisy. It turns out, however, that unlike the Nationwide commercial, this anti-PETA ad is actually pretty accurate.

In a new report, it has been revealed that Virginia’s PETA shelter euthanizes a majority of the animals they bring in. Take a look at this tragic rate from the state branch of the “animal rights” organization:

According to a state report, of the 3,017 animals PETA took in in Virginia last year, 2,455 were put down. That is a kill rate of about 81 percent.

Because of these horrifying statistics, critics are demanding the PETA location be shuttered, as well as better define what it means to be an animal shelter. On Monday in Virginia’s House of Delegates, Virginia legislators passed Bill 1381, which would “seek to prevent any private shelter from practicing euthanasia.” Instead of chambers where these poor creatures go to be killed, these shelters would act more like safe adoptive homes. The law passed overwhelmingly with a vote of 95-2.

The ad from the Oscars reports that PETA has killed more than 33,000 animals since 1998. So, for all those animal rights activists who like to push the envelope with their radical demonstrations to supposedly bring awareness to animal abuse, they might want to aim those protests at their own organization.

For those interested, here was the Oscar ad in full:

Update: The Center for Consumer Freedom reached out to me to provide more information about PETA's mistreatment of the animals it claims to protect. Here's a snippet from a press release sent earlier this month, with comments from Will Coggin, the director of research at CCF:

PETA’s kill numbers come from the Virginia Department of Agriculture and Consumer Services (VDACS), which requires such annual disclosures to be made. Most animals don’t even get a chance: A 2010 inspection conducted by a VDACS veterinarian of animal custody records discovered that 84 percent of the animals PETA took in were killed within 24 hours.

Coggin concluded, “PETA’s so-called ‘shelter’ might as well be called a slaughterhouse. For an organization that once disgustingly compared the treatment of farm animals to the Holocaust, you’d think PETA would avoid the appearance of systematic killing. It’s time Virginia stopped the madness and shuttered PETA’s shelter of horrors for good.”.

One Democrat's Hypocrisy Soars to New Heights... All Over National Parks
Beth Baumann
Karen Bass Previously Praised the Church of Scientology and Now It's Biting Her In the Butt
Beth Baumann
Why President Trump Is Calling for a Revote In a Primary Election
Beth Baumann
Pro-Police Groups Paint Nation's First 'Back the Blue' Street Mural in Tampa
Madeline Peltzer
Why Our Ambassador to South Korea’s Mustache Became a Controversial Issue