Sen. Begich: “The President’s Not Relevant” 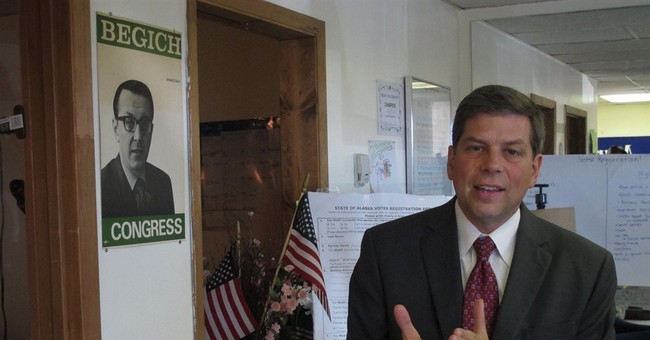 Perhaps to avoid the brutal Grimes gaffe, Democrat Alaska Sen. Mark Begich conceded that he did in fact vote for President Obama in the last two presidential elections. Yet, the senator quickly followed up that answer by arguing his support of Obama has nothing to do with his current campaign:

"I did, but that's irrelevant," Begich, the Democratic incumbent from Alaska, told the Washington Examiner. "The president's not relevant. He's gone in two years."

He then listed a slew of topics upon which he disagreed with Obama, such as funding rebels in Syria and pushing gun control.

Hot Air's Mary Katherine Ham commented on Begich's statements on Fox News this morning, noting it is more proof that Democrats are "contending the president's popularity at every turn:"

Begich joins the list of vulnerable Democrats who are distancing themselves from a president that 9 percent of likely 2014 voters are enthusiastic about. Among them include Sen. Mark Udall (D-CO), who claimed he was the “last person” the White House would want to see walking across the lawn, and Sen. Mark Pryor, who was left tongue tied on the White House’s handling of the Ebola outbreak and tried to escape questions on his support of Obamacare. Most worthy of all is the already mentioned Alison Lundergan Grimes, the Kentucky Democrat running against Mitch McConnell who in addition to refusing to say whether she voted for the president in 2008 or 2012, went so far as to make an ad claiming she’s “No Barack Obama,” while proudly wielding a gun.

Try as they might to campaign independently of the president, all of the above Democrats have a 90 percent or higher matching voting record with Obama.

Begich is also facing criticism for re-airing an insensitive ad that claimed his Republican opponent Dan Sullivan was indirectly responsible for a murder after dealing a “soft” sentence on a sex offender while he served as state attorney general – an accusation to which Politifact gave its harshest rating: “pants on fire.”

Our poll tracker has Sullivan ahead by four percentage points.