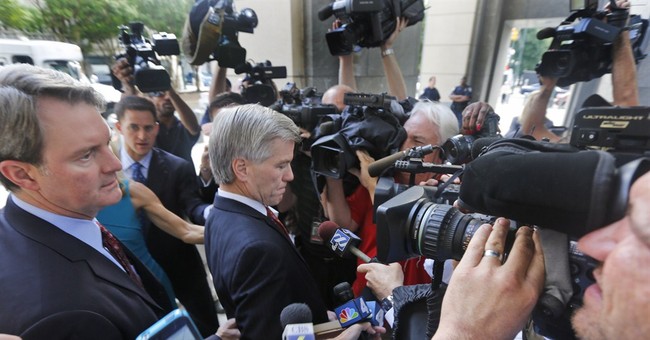 Former Virginia Governor Bob McDonnell's (R) corruption trial became a testy family affair Tuesday when his sister-in-law had nothing but harsh words for her brother's wife. The former First Family has been charged with accepting hundreds of thousands of dollars in gifts from business executive Jonnie R. Williams Sr. in exchange for promoting his company, Star Scientific, which sells dietary supplements, and offering him access to the governor's office. On the witness stand this week, McDonnell's sister tried to  place the blame for the unethical relationship on her sister-in-law:

“There are two sides to Maureen,” she testified. “You’re not sure which one you’re going to get — which one will show up.”

One, she said, was “very sweet, very tender.” She recalled how the former first lady sat with her husband’s mother as she lay dying, rubbing lotion on the elderly woman’s legs and head.

McDonnell's sister also referred to his wife as a "vitamin nut," suggesting she is the likely culprit in wanting to promote Williams' products. She isn't the only who had an unflattering description of the First Lady. On Monday, one of Governor McDonnell's longtime aides accused his wife of being so "diva-ish" that her staff once threatened to quit.

So, why is McDonnell's defense team employing a strategy that is so critical of his spouse? Well, if they make the case that McDonnell was simply a victim of his wife promoting Williams' company behind his back, it could earn him some sympathy from the jury.

Whether or not the jury takes the bait remains to be seen. Until then, this is one Family Feud that will not end in cheers from a studio audience.