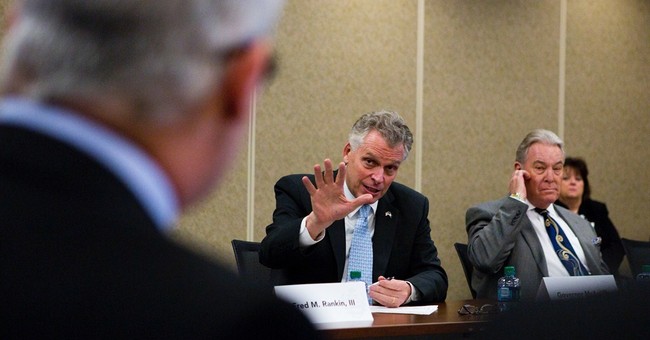 Gov. Terry McAuliffe used his veto power for the first time Tuesday, rejecting a bill that would have made it clear all legitimate gun owners could carry a weapon in an unlocked glove box or console of their cars.

Del. Ben Cline, R-Rockbridge County, is a sponsor of the bill. He says his legislation was meant to clarify that existing state laws allows gun owners who do not have a concealed carry permit to put guns in secure compartments. He considered McAuliffe's veto a direct assault on the right to bear arms and accused him of courting the gun control lobby:

Cline said he was “disappointed that Governor McAuliffe’s first use of the veto is in opposition to a bill defending the Second Amendment rights of law-abiding Virginians. “The governor is clearly listening to his friends in the gun-control lobby instead of the majority of Virginians who support the Second Amendment.”

The action may seem modest, but this isn't McAuliffe's first gun control rodeo. During his gubernatorial campaign, he advocated for a ban on semi-automatic rifles and standard capacity magazines.

Cline is now hoping the General Assembly can override McAuliffe’s latest anti-gun action during its “veto session” on April 23.

Maybe one day McAuliffe will place Virginia's needs over those of gun control advocates.