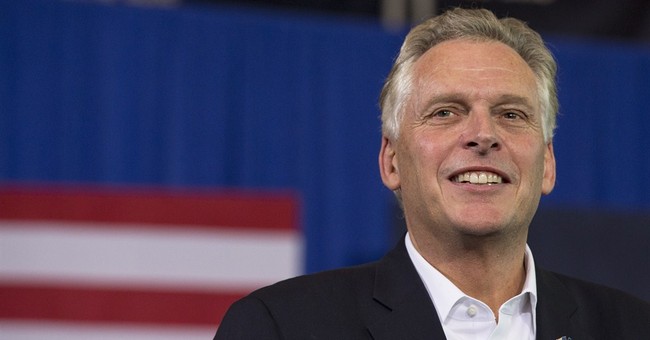 Terry McAuliffe won't take his place as the Governor of Virginia until January, but he isn't wasting any time when it comes to getting ahead on his anti-gun agenda. During the campaign, McAuliffe advocated for a ban on semi-automatic rifles and standard capacity magazines. Now, he's hired Lori Haas, the Virginia State Director of the Coalition to Stop Gun Violence [CSGV], to help with his transition team. Haas' daughter was shot during the Virginia Tech massacre in 2007. More from the DC:

Despite claiming support for the Second Amendment, Haas’s appointment to this position to help assemble his Administration sends a very clear message to gun owners and sportsmen in Virginia that their rights are already under attack in Richmond.

CSGV is an extremist group that demands harsher gun control restrictions and laws than the Brady Campaign. Their activists have advocated for the criminilization of private gun ownership, limited magazine capacity and gun bans. They've also made the NRA their number one target. Here's more from their website:

1) We are taking an aggressive approach with political advocacy. Our message to elected officials is simple: “The era of no accountability is over. If you do the NRA’s bidding and put our loved ones in the line of fire, we will educate your constituents about your record.” This strategy involves the use of social media campaigns and hard-hitting TV, radio and print ads.

2) We are building personal relationships with legislators and challenging them to become dedicated, long-term advocates for sensible gun laws. The victims and survivors of gun violence on our staff are the leaders in this lobbying effort. We are also looking to facilitate the advocacy of state/local activists whenever and wherever we can.

3) We are the first gun violence prevention group to talk about the issue in terms of democratic values, and to use the term “insurrectionism” to describe the NRA’s treasonous interpretation of the Second Amendment. By exposing the hypocrisy of the NRA’s “freedom” message, we have reframed the debate and put them on the defensive.