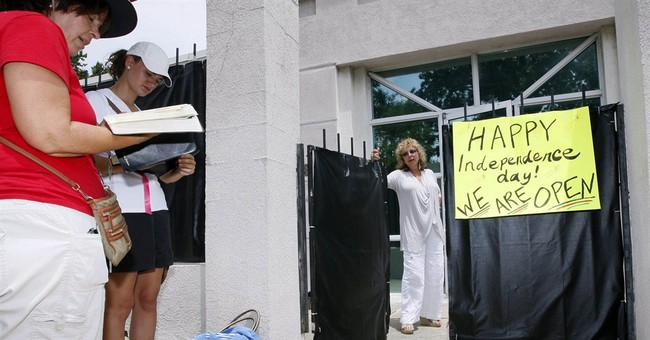 The top trending story on Cosmo magazine’s “The Hot List” isn’t about the latest pair of shoes, the trendiest scarves or even the latest celebrity scandal. It’s about pro-life activists and their harmful effect on young women.

Last week, Cosmo published the ever-misleading, “6 Women on Their Terrifying, Infuriating Encounters With Abortion Clinic Protesters.” The article provides a quick background on the controversial “buffer zone” law in place in Massachusetts, which prevents pro-life activists from coming within 35 feet of abortion clinic entrances as they try to counsel young women arriving for abortions. The piece then lists six women’s “horror stories” about encountering these menacing pro-lifers.

For instance, there’s Brittany from Colorado, who says anti-abortion activists threw doll parts at her as she arrived for her abortion appointment. Or Bre from Maine, who witnessed “grotesque decoupage collage signs of mutilated fetuses.” Another young woman, Heather, from Arizona, made this observation after being disturbed by similar images:

“If they wanted to make an impact, why not just talk to women about what they are actually going through? Holding up signs of dead babies is not going to get your point across.”

The thing is, they do talk to these young women about their situations. I’ve been to a sidewalk counseling training session and the first thing they teach you is to make sure you relate to the distressed young woman, don’t judge her and try to encourage her to see she is strong enough to give her baby life. It’s unfortunate these young women featured in the article experienced such treatment as they say they did from pro-life activists, and unfortunate still that these are the six stories Cosmo chose to share with their readers.

I’ve met several pro-life sidewalk counselors before and have witnessed them in action. I can tell you, their tactics couldn’t be more harmless. They smile, ask young women politely if they can talk to them about their baby, and hand them a pamphlet or two. As for signs, the majority I’ve seen are inked with positive messages such as, “Smile! Your Mom Chose Life.” In fact, the only threatening behavior I’ve seen has come from the other side. The activists have been cursed at, pushed or worse, facing threats on a daily basis just for exercising their free speech. The most important thing to keep in mind is these activists’ ultimate and worthy goal: to save babies. I wonder if Cosmo will run a follow-up story on that?

I guess it’s no surprise the publication would run such a biased, pro-abortion feature considering the editor-in-chief is chummy with Planned Parenthood and has called her circular a “deeply feminist” magazine. What a shame Cosmo is leading girls to believe that demonizing pro-life sidewalk counselors is in style.