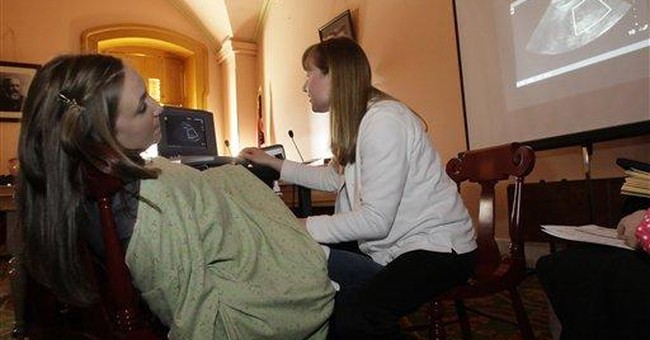 After their sweep of Virginia’s statewide race in November, Democratic politicians have

Here are the two bills they are championing, which just passed the Virginia Senate:

Senate Bill 617 would repeal the state’s mandatory ultrasound law and Senate Bill 618 would eliminate the prohibition of insurers from offering abortion coverage to Virginians through the state health exchange.

Governor Bob McDonnell signed the abortion-ultrasound bill into law about two years ago. The pro-life legislation allows women to see the results of their ultrasounds – significant because 78 percent of women who see their ultrasounds end up choosing life for their unborn children.

Unsurprisingly, pro-abortion Planned Parenthood and NARAL Virginia Pro-Choice have voiced their support of the legislation, arguing the laws “attempt to shame women contemplating the procedure.”

Because ultrasounds offer a window to the womb and more often than not convince mothers to stay mothers, it’s no wonder pro-choice activists consider the procedure a threat.

Fortunately, with Republicans still controlling the House of Delegates, the Richmond Times-Dispatch surmise the repeal bills will remain “largely symbolic.”