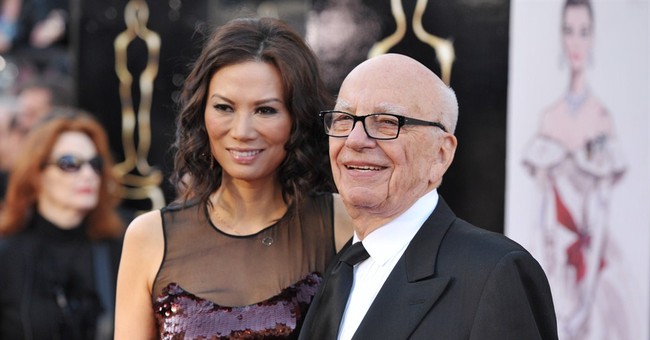 He’s one of the most powerful media moguls in the world and he has about $13 billion to his name. But, the only title The New York Times seems interested in is Mr. Rupert Murdoch's ‘Single’ status. The “Fashion and Style” section is here to help.

Murdoch, 82, recently divorced his third wife, Wendi Deng, 45. Reporter Brooks Barnes writes that although the former is no spring chicken, he should nonetheless start thinking of his next relationship:

Mr. Murdoch may be interested in finding a new companion sooner than later. Age has clearly been on his mind. “Can we all live to 120 or more? Probably not, but our children for sure,” he tweeted last month, referencing a Wall Street Journal article on genetics. And a new female friend may help give his image a boost following widespread speculation about Ms. Deng’s romantic entanglements.

So, Barnes decided to help Murdoch out by “making some phone calls on his behalf” to Bravo’s “Millionaire Matchmaker” and Ken Solin, a dating columnist for AARP’s online magazine. Here are a few specific suggestions these experts made for Murdoch:

- “Avoid gifts of cash, credit cards, condos or cars — the Four C’s. “Those are gifts for a wife, not a girlfriend.”

- “Resist trying to make himself appear younger by deploying 50 shades of gray — dyeing his hair various tinges of brown, black and auburn.”

- “Don’t try to be something you’re not. Don’t start wearing jackets with your shirt hanging out.”

Barnes’s only regret was that he couldn’t get in touch with Julie Henderson, chief communications officer for 21st Century Fox, or Steven Rubenstein, an outside P.R. adviser to Mr. Murdoch, both of whom refused to comment.

I’m sure Murdoch appreciates Mr. Barnes’s efforts to include himself in his personal life, but based on the mogul’s success, I think he’s earned the right to buy any pair of jeans he likes.