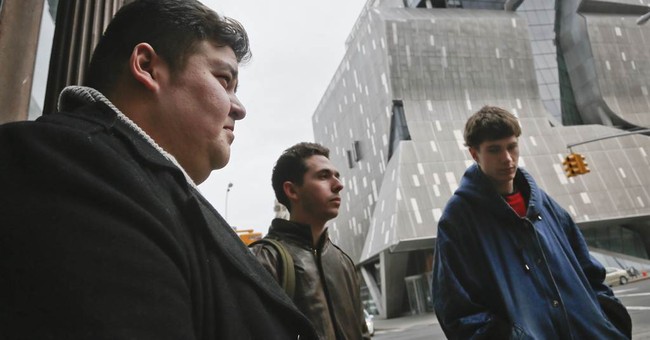 Free speech is free, isn’t it? That may not be the case at these New York City schools. Students at The City University of New York and Cooper Union are beginning to realize that protesting could soon cost them their education.

Although Cooper Union has been tuition-free for over 100 years, this past week the school made the unpopular announcement that it was going to begin charging students tuition as a way to ease its financial burdens. As expected, students didn’t take the news well and now, in response to their vocal complaints, the school is taking some drastic measures:

The new code of conduct administrators are drafting would prohibit “deliberate or knowing disruption of the free flow of pedestrian traffic on Cooper Union premises” and “behavior that disturbs the peace, academic study or sleep of others on or off campus.”

Disturbing the sleep of others? Clearly, these administrators don’t understand campus life. Behavior that prevents students from getting some shut eye could include partying and playing loud music, which are two staples of a college experience.

Meanwhile at CUNY, administrators are proposing restrictions on free speech after witnessing protests against the school’s tuition hikes, hiring of David Petraeus, and the closing of the Marales-Shakur Center, which had been the political heart of City College of New York since 1989, according to Gothamist.

A draft from June declared free speech and assembly to be subject to the needs for public order. It would restrict gatherings and the distribution of leaflets to approved areas and times and would forbid faculty members from taking part in protests during working hours. Sponsors of planned protests with as few as 25 students would have to give at least 24 hours’ notice of location, date, time and expected turnout, subject to the college’s approval or alteration.

Some of the protesters may have acted a bit disorderly. But why punish the entire school body for the unwise actions of a minority?

Ironically, these drafted laws did the exact opposite of what they intended: they disturbed the peace.

In addition to their anger over the proscribed action at Cooper Union, student leaders also took offense at being given a reduced role in the disciplinary process and in the drafting of the document itself. “The whole community at Cooper got really riled up,” said Hadar Cohen, a member of the engineering school’s student council. Along with faculty members, they objected vehemently at a meeting in the university’s Great Hall last week.

Expressive activity is a student’s right. This “shut up and listen” mentality is counter to the kind of culture college campuses are supposed to provide. For continually promoting a need for “diversity,” how quickly these schools change their mind when it comes to young learners using their First Amendment freedoms.

What a nice lesson.