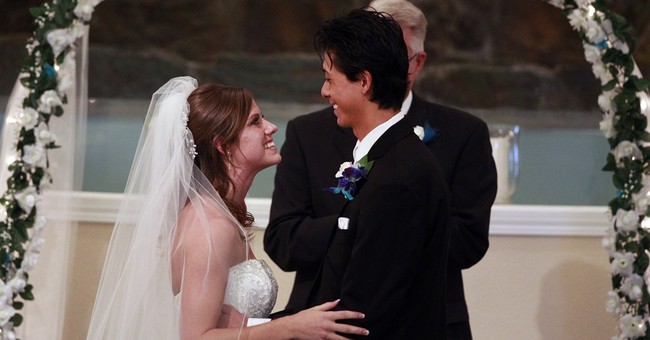 “Message to parents: If you want your boys to grow up to be good husbands or partners, make them wash some dishes and iron clothes when they're young!”

The feminist website Mother Jones issued readers this urgent warning after interpreting a study that men with sisters are more likely to be Republicans, apparently because they grow up watching women perform the traditional roles of housework.

The report, titled “Childhood Socialization and Political Attitudes: Evidence from a Natural Experiment,” determined that boys with only sisters were 13.5 percent more conservative in their views of women’s roles than boys with all brothers. The researchers came to this conclusion after finding that men who grew up with sisters continue to perform fewer household chores even in middle age, as opposed to brothers, who evenly shared those “feminized” or “female-stereotyped” tasks.

The writers at Mother Jones, never ones to be silent on gender equality, were quick to pounce on this study as proof that Republican men are bad husbands. Does the “Republicans believe women belong in the home” line sound familiar?

Yes, the results may show that men with sisters are more conservative and do less housework, but is this really a stain on their character? I hope I’m not alone in believing that a husband’s faithfulness and provision is more important than his ability to use the dishwasher.

This also may be a shocker to self-righteous feminists, but some women actually enjoy and take pride in their motherly roles. When democratic strategist Hilary Rosen criticized Ann Romney last April for “never working a day in her life,” Romney responded for full-time mothers everywhere with this awesome response:

I made a choice to stay home and raise five boys. Believe me, it was hard work.

But, not all women share Romney’s view. Instead of seeing motherhood as a gift, they consider it a prison – one that holds them back from climbing the social economic ladder. Rather than appreciate their husbands, they are offended by them.

Thank goodness we have women like Ann Romney defending the important, "traditional" roles of mothers and motherhood - without which, men may not learn how to be good husbands at all.