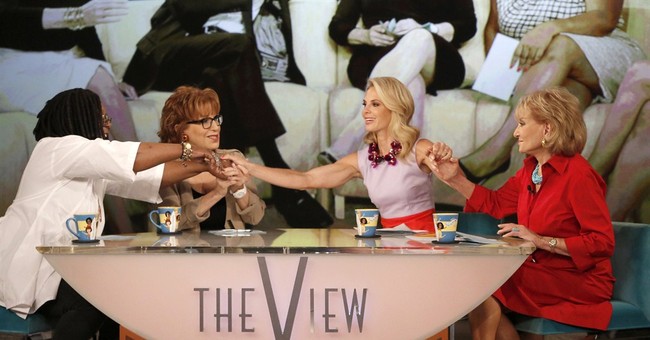 She had to suffer through grueling obstacles courses, battle some annoying mosquitoes and endure a bit of backstabbing from her tribe. Oh yeah – and she was also on Survivor. The fact that Elisabeth Hasselbeck lived on a deserted island for 31 days perhaps explains why the conservative mother was prepared for the nine years she spent co-hosting The (Liberal) View.

Hasselbeck thrives on challenges. She knew that when she auditioned for Season Two of Survivor in 2001, Survivor: Australian Outback, and played a smart enough game to reach the final four. She also must have known her own strength when she signed a contract with ABC two years later to sit at the same table as four outspoken left-leaning women. The former castaway gave viewers a conservative perspective in the midst of liberal babble for nearly a decade on The View, until saying goodbye this past Wednesday.

Just a few examples of the animosity Elisabeth had to endure on the talk show include the infamous exchange between her and Rosie O’Donnell in 2007 during the latter's brief time co-hosting. In case you were given the wrong account, O'Donnell attacked Hasselbeck out-of-the-blue for not defending her when the media claimed O’Donnell thought our US troops were “terrorists.” Refusing to have a fair argument with Hasselbeck, O’Donnell declared, “You know how the media will spin it – ‘Big, fat, lesbian Rosie was attacking poor, little Republican Elisabeth.’” Hasselbeck refused to sit there and listen to such nonsense and gave it right back to O’Donnell as the two argued for four minutes straight.

Hasselbeck made a habit of not only defending herself on The View, but the conservative values for which she stands.

During one “Hot Topics” conversation, the co-hosts discussed an incident in which a group of pro-life students protested President Obama’s commencement speech at Notre Dame University because of his radical abortion agenda. While comedian Joy Behar was busy fawning over President Obama for his “cool factor” and “eloquent speech,” Hasselbeck challenged her co-hosts to consider the immorality of abortion and Obama’s history of refusing to protect the unborn.

The discussion eventually turned to co-host Sherri Shepherd, who candidly spoke of her own abortion as a teenager. Whoopi Goldberg declared she was “glad” Shepherd “didn’t have that child” while Behar joked, “He could have been Hitler.” But, Hasselbeck offered her usual positive perspective, asking “Who knows if her baby couldn’t have been the president of the United States?”

Due to her outspoken conservative opinions, liberal pundits enjoyed tainting Hasselbeck’s image. In this particular piece, the author quipped, “With her perfect blond hair and quarterback husband, she's the icy, rich prom queen surrounded by normal kids at The View's cafeteria table.”

Icy? These are some of the words her co-hosts – all of whom she’s disagreed with politically – used to describe her: Whoopi Goldberg: “She’s the cat’s meow,” Barbara Walters: “I like her personally and she’s just a wonderful person,” Sherri Shepherd (tweet): “Elisabeth Hasselbeck is one of the most genuine people I know and I am honored to call her my friend.”

Over at Jezebel, feminists may as well have a whole section devoted to bashing Hasselbeck if you take one look at this hate-filled write-up. Like O’Donnell’s strange outburst, however, these baseless insults only make Hasselbeck stronger.

After a decade of sitting in her View chair and getting berated both on and off the screen, Hasselbeck is moving to more friendly territory at Fox News as she prepares to co-anchor the popular morning show Fox and Friends.

Whatever the reason for the smears against Hasselbeck -- be it jealousy, intimidation, or ire toward conservatives, the haters can’t change the fact that she is, as Rosie suggested, “a sweet, innocent Republican” – and one hard to be replaced. It remains to be seen if The View producers will choose another right-winger to try and balance the ideological spectrum at the table, which is already unfairly tilted.

As she prepares for the transition to Fox News, I want to pass on a note of thanks for her years of courage. So, thank you Elisabeth, for speaking up for conservatives – especially conservative women – as otherwise liberal nonsense was screamed at us from the TV screen. With you leaving the show, The View loses a significant amount of poise, intelligence and good nature.

As for the future of the ABC show, I wouldn’t be surprised if the audience dwindles and leaves the network no choice but to declare, “The tribe has spoken.”