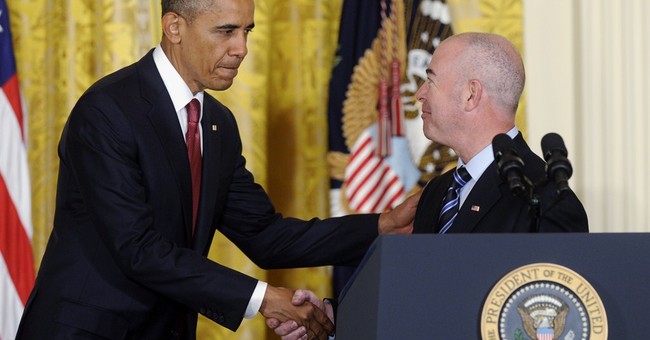 "Mr. Mayorkas is still at the Department of Homeland Security because he is a decorated public servant and an effective leader of that organization," Earnest said at a White House press briefing. "We certainly value the kind of contribution he has made to the effective management of the department and he has played an important role in implementing needed reforms in that department."

The IG report described Mayorkas' "important role" at the DHS a little differently:

After receiving allegations from career U.S. Citizenship and Immigration Services (USCIS) employees that Alejandro Mayorkas, then-Director of USCIS and current Deputy Secretary of the Department of Homeland Security (DHS), was exerting improper influence in the normal processing and adjudication of applications and petitions in a program administered by USCIS. Specifically, we were told that Mr. Mayorkas was in contact, outside the normal adjudication process, with specific applicants and other stakeholders in the Employment-Based Fifth Preference (EB-5) program, which gives residency preference to aliens who agree to invest in the U.S. economy to create jobs for U.S. citizens. We were also told he was exerting influence to give these individuals preference and access not available to others.
...
In three matters pending before USCIS, however, Mr. Mayorkas communicated with stakeholders on substantive issues, outside of the normal adjudicatory process, and intervened with the career USCIS staff in ways that benefited the stakeholders. In each of these three instances, but for Mr. Mayorkas’ intervention, the matter would have been decided differently.
...

The juxtaposition of Mr. Mayorkas’ communication with external stakeholders on specific matters outside the normal procedures, coupled with favorable action that deviated from the regulatory scheme designed to ensure fairness and evenhandedness in adjudicating benefits, created an appearance of favoritism and special access. As a result of his deviation from the normal process, applicants and stakeholders with whom he had just been in contact received a specific benefit.

(emphasis added) The Obama White House, however, not only seems to see no problem with Mayorkas using his government office to provide "special benefits" to Democrat donors, they seem to believe that is how government is supposed to work. From Earnest Wednesday:

What I'm telling you is that the questions that were raised were about how effective this EB-5 visa process works. And these are exactly the problems that Deputy Secretary Mayorkas was trying to address.

The EB-5 program has long been a source of fraud, criminality, and profiteering, but this is the first time a leader as high up as Deputy Secretary has been implicated in using the program to provide special benefits to the politically connected.