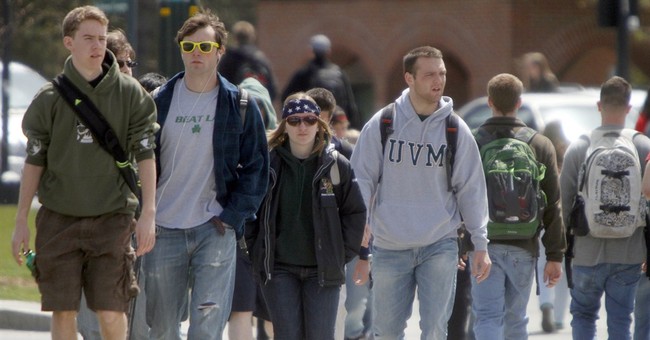 Signed by Gov. Jerry Brown on September 28th, the law requires all colleges receiving state funding to adopt an "affirmative consent" standard for all student disciplinary cases involving sexual assault charges. The law defines "affirmative consent" as "conscious, and voluntary agreement to engage in sexual activity" that "must be ongoing throughout a sexual activity and can be revoked at any time." The law also mandates that victims filing sexual assault charges need only meet a "preponderance of the evidence" burden to establish the accused's guilt.

Most conservatives seem to be against the effort.

At The Federalist, Amy Otto worries that, "Increasing regulations on intimate relationships will invariably lead to a need for publicly documenting a private act."

And under the headline, "California Sends in the Sex Police," Bloomberg's Ramesh Ponnuru argues that the law's supporters are too dismissive of the possibility that a "false or misguided accusation" could result "in a student's expulsion."

The critics do have some strong points. The law's call for an "ongoing" "conscious and voluntary agreement to engage in sexual activity" does not come close to matching how the vast majority of sexual behavior happens in the real world. Any man who has sex on college campus will probably be in violation of at least the letter of the law.

But this does not mean college administrators are going to be snooping from door to door monitoring student sexual activities. A woman must be motivated to bring a complaint against a man before the college will get involved.

And when a women does a bring a complaint against a man, the law is so broad and unrealistic that it almost guarantees he will lose. In a sense, "affirmative consent" laws have created a strict liability standard for hook ups gone bad. If she's unhappy the next morning, unhappy enough to file a complaint, then the man she hooked up with will be presumed guilty of something.

And women are often unhappy after hook ups. According to one 2010 study, just 26 percent of women "reported feeling positive after a hookup" compared to 49 percent of women who "reported a negative reaction," and the balance who had mixed feelings. Those aren't good odds for would be Lotharios.

But, from a social conservative viewpoint, is this really all that bad? Why on earth are we so concerned about protecting those who participate in the hook up culture? Shouldn't we want to create an incentive structure for men that encourage them to invest in long-term emotional relationships with the women they want physical intimacy from?

The message the law sends to college men is simple: "Don't engage in physical intimacy of any kind with any woman who has not already proven she cares for your emotional well-being."

Is that really so bad an outcome?