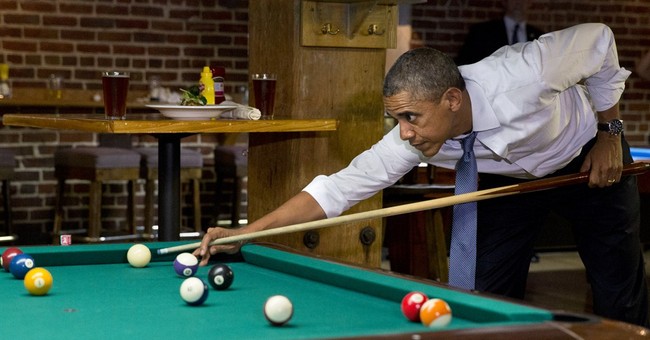 New York Times columnist Ross Douthat has written a generous and fair response to the suggestion made yesterday that Republicans should not pass a border crisis response bill this month. Douthat writes:

I share Carroll’s frustration with the president’s conduct of immigration policy, but I don’t think the logic here quite makes sense. Republicans would be responding to a presidential power grab in one area by essentially demanding that he expand that power grab even further, and washing their own hands of a crisis situation while they wait to see if he’ll act without them. Wouldn’t that kind of stand-down legitimize presidential overreach muchmore than passing the actual bill that Republicans believe is legally and constitutionally required?

In short, no. DACA is an unprecedented expansion of executive power while suspension of the 2008 Trafficking Act is justified by the statute itself.

Obama's DACA program has no basis in federal statute. All presidents can exercise prosecutorial discretion to grant administrative relief from deportation on a case-by-case basis. But DACA transformed that case-by-case discretion into a broad based generally applicable program whose outlines were specifically rejected by Congress.

By contrast, the 2008 Trafficking Victims Protection Act explicitly contains an "exceptional circumstances" clause allowing a president to suspend the requirement that unaccompanied minors must be turned over to HHS.

In other words, Obama already has the authority to suspend the 2008 Trafficking Act, he just doesn't have the political will to do it.

But there is a larger point Douthat only mentions in passing: this border is taking place in the middle of a much larger battle over Obama's abuse of executive power.

From his drive-by war on Libya, to the NSA, to the Obamacare employer mandate delays, to the unlawful spending on Obamacare exchanges, to the impending Obamacare risk corridor bailout, to Obama's rewrite of federal education law, to his illegal NLRB appointments, to his illegal net neutrality regulations, Obama has repeatedly thumbed his nose at Congress and dared them to hold him accountable for his lawless actions.

"So sue me," Obama has taunted.

House Speaker John Boehner (R-OH) has since moved to do exactly that, but Boehner's suit is based on a novel theory of legal standing that might be rejected by courts.

And if a court does throw out the Boehner lawsuit, that court will say disputes between Congress and the Executive Branch are meant to be settled politically. If Boehner doesn't think Obama is enforcing the law, then he must use what limited power he does have as Speaker, to make him.

And one power Boehner does have is to just say 'no'. Just say 'no' to everything Obama wants until Obama starts executing the law faithfully.

Doing nothing absolutely is politically risky. But pretending Obama will faithfully execute whatever Congress does pass will arguably only enable Obama's lawlessness more.