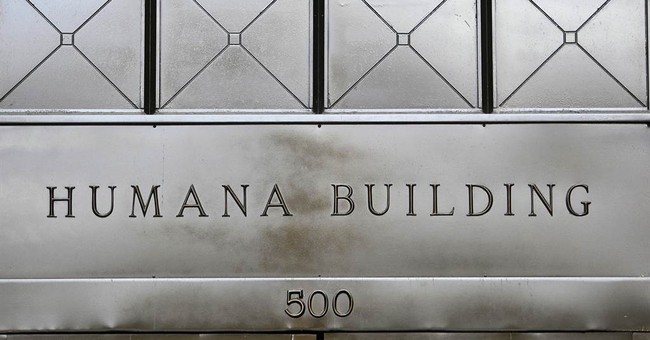 The Washington Examiner's Phil Klein covered a health care conference sponsored by JP Morgan Tuesday, where health insurance CEOs gave their takes on the future of the industry, including this gem from Jay Gellert, the CEO of Health Net:

"We’re all in in the ACA. We’re all in and we’re happy we are. ... The business is going to be increasingly government driven ... the commercial-to-government ratio is going to change dramatically over the next two or three years."

Gellert's statement about the future of the health care sector of the economy is also the Democratic Party's vision for America's entire economic future: large, happy, corporations guaranteed market share and solvency by federal government subsidies and bailouts.

It is not a vision without its upsides. The Democratic Party's corporatist vision for America promises safety and stability for big corporations, their CEOs, their workers, and the customers they serve. People like to feel safe and secure.

But there are drawbacks to corporatism as well. Slower growth, less innovation, and an entrenched corporate-government elite who will jealously protect their power.

But liberals will never admit to any of the downsides to their chosen corporatist path. Last night, I linked to Klein's story and tweeted:

Serious question for @jonathanchait: what is the track record for innovation in govt led corporatist industries? http://t.co/WKjO4ExEMi

To which Jonathan Chait responded:

Chait then followed up with a post this morning adding NASA to the list of awesome government innovators.

So let's take a closer look at Chait's list.

First, the aerospace industry is dominated by two gigantic corparartist entities: the EU's Airbus and the U.S.'s Boeing. Does Chait really want to hold these two companies up as models of success?

Despite receiving multiple subsidies from it's nation state sponsors, Airbus has still had to be bailed out multiple times.

Boeing's been no better. Its products have also suffered from similar cost overruns, delays, subsidies, and bailouts. Actually, Chait is right: that does sound an awful lot like Obamacare.

Moving to Chait's second model for government innovation, let's savor for the moment the irony of liberal Democrats holding up the defense industry (the Pentagon!!!) as a model of government led corporatism.

I mean really, is there a single sector of the economy more famous for exorbitant prices (remember the $600 toilet seats), waste, fraud, and abuse then the defense industry?

Yes conservatives do normally defend defense spending. But only as a necessary evil. It is a special situation. The government ought to be the only purchaser of advanced weapon systems. Real competition is impossible.

But this is a huge reason why the defense sector is so inefficient. The defense industry is a leading example of why making government the dominant purchaser in any sector of the economy should be avoided at all costs. But the new corporatist Democratic Party now holds it up as an example to emulate. You've come along way baby.

Biotech is an interesting choice by Chait, especially since the government's role in this sector has actually declined. In the 60s and 70s, the federal government made up the vast majority of biotech R&D funding. But that all changed in the 80s. Today the private sector controls most biotech research dollars. Perhaps coincidentally, innovation in the biotech sector has significantly improved since the private sector took the lead. It should also be noted that it is the small firms usually funded by venture capital, not the government subsidized giants, that come up with the most innovations.

Finally, Chait offers up NASA as another example of government led innovation in his post this morning. And yes NASA did get us to the moon. But this just shows what kind of innovation government is good at, and what it is bad at.

If you have a specific engineering goal, like getting to the moon or building an atomic bomb, then the federal government's ability to concentrate vast resources to solve that one problem is unparalleled.

But if you want to do something more complicated, like come up with faster, safer, and more efficient production and delivery systems (think WalMart, Chiptole, Amazon, FedEx), then a private-led, not government-led, sector is your best bet.

Our health care system is already really good at creating really expensive new technological procedures that extend life. What it sucks at is developing cost-effective new ways of delivering those new technologies to people on a mass scale. That is the type of innovation our health care system desperately needs and it is also the exact type of innovation Obamacare will stop cold.