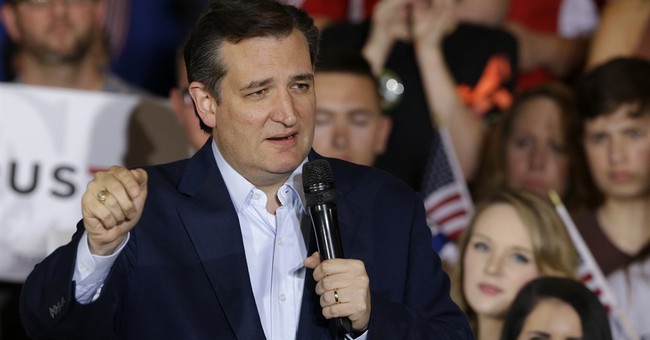 To Ted Cruz, John Kasich, and #NeverTrump Allies -- time for everyone to take a big deep breath! Nothing happened last night that was not already predicted and considered in the GOP nomination delegate count. Read Scott Rasmussen’s excellent breakdown of the primary this week and how everyone should keep the results in perspective.

There are still 10 states left, and Ted Cruz is poised to win 5-7 of them. Here's the breakdown:

Cruz needs to win this, and with Kasich not campaigning here and a potential endorsement from Gov. Mike Pence in the wings, Cruz should be able to win this and swing momentum back his way.

Cruz is poised to win in Nebraska especially as it is a closed primary, which means only registered Republicans can vote.  Cruz tends to do really well in these kinds of situations.

All indications show that Cruz is poised to do well here, especially as it is another closed primary.

Easily Cruz country. Has won and will win all states surrounding it.

Trump will easily win WV, but the delegate allotment is proportional.  Cruz could pick off a few delegates.

If there was a state that Trump will definitely win next to West Virginia, it’s here in New Jersey. But Trump will not be able to clinch the nomination just winning in NJ and WV.

While Cruz agreed to not campaign in Oregon so Kasich would have a shot, it’s not completely clear if Cruz or Kasich could win this, especially as voters submit their ballot via mail.  The delegate allotment is minimal and is not do-or-die for Cruz, but he could do well as Oregon neighbors friendly Idaho and potentially Washington state.

Like Oregon, Cruz will not be actively campaigning in NM either.  There have been polls done here since February, according to RealClearPolitics, but it does neighbor Cruz-friendly Texas.  If Cruz were to lose here, it would still be possible for Trump not to get to 1,237, but it will make California even more important.

Without a doubt, everything will come down to California. If this is the state that needs to stop Trump, the entire Republican/Conservative political machine will throw everything at this state to make sure Cruz wins. Remember, this state also has a proportional allotment of delegates.

On the chance that Trump wins the majority of votes statewide, the real battles are really for the congressional district delegates; it almost makes this 53 mini primaries.  If it’s really a nail-biter, Cruz and Kasich will need to either form an alliance to work together here, or Kasich needs to sit this one out.

While the so-called prognosticators in every mainstream and cable news entity have gotten this entire election wrong so far, I would not place all my bets on the media predicting the last 10 states correctly.

If Cruz wins all the states in the MUST WIN category, does well in Oregon and New Mexico, forces will help Cruz take down Trump in CA, especially if he is seen as the only one who can stop Trump. It is still mathematically possible to deny Trump the 1,237 delegates needed.