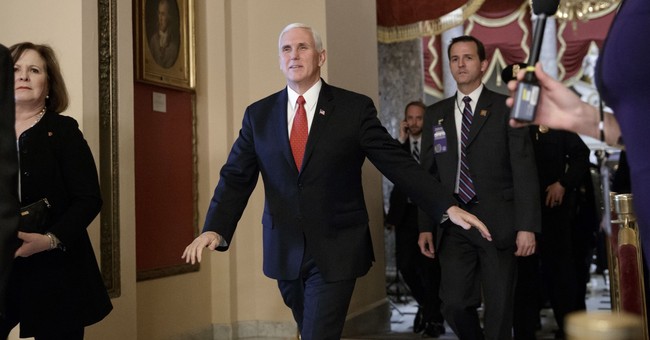 Vice President Mike Pence may have postponed his scheduled trip to Egypt and Israel this week to ensure that the tax bill would be passed without a hitch, but it turns out he needed to use his passport after all.

Instead of traveling to Israel, Pence made a secret trip to Afghanistan, where he met with U.S. troops serving in the country as well as Afghan leaders. News of the trip broke shortly before 4:30 p.m. EST on Thursday.

This is Pence's first trip to Afghanistan.

"Before I left the Oval Office yesterday, I asked the president if he had a message for our troops here in Afghanistan," said Pence. "And he looked at me without hesitation from behind the resolute desk, and said 'Tell them I love them.'"

Pence told the crowd that he and the president "couldn't be more proud of every one of you," and had them give themselves a round of applause.

Vice President Mike Pence speaks to troops during surprise visit to Afghanistan: "Give yourselves a round of applause. We couldn't be more proud of every one of you." https://t.co/cP0dpIs6wN pic.twitter.com/vb0lnLbPAx

According to the AP, Pence met with the president of Afghanistan as well as Gen. John Nicholson, who is the top U.S. commander in the country.