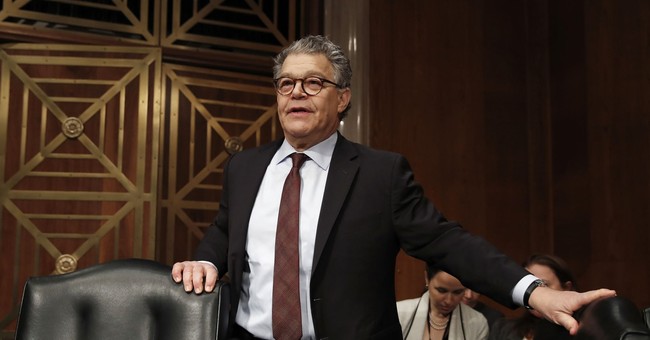 UPDATE (2:55 p.m.): Sen. Angus King (I-ME) issued a statement saying that he believes it is time for his "friend" to resign. While King is an independent, he caucuses with the Democrats.

My statement on Sen. Franken: pic.twitter.com/SuI2gmHHRk

UPDATE (1:53 p.m.): A total of 22 Democratic Senators have now called for Franken to resign.

UPDATE: 22 Democratic senators have called on Sen. Franken to resign:

UPDATE (1:27 p.m.): Matt stepping in here for Christine for a second...Sen. Fienstein has called on Franken to go.

.@SenFeinstein calls on @SenFranken to go: "It’s clear the American people don’t look lightly on these kinds of actions, no matter who they’re committed by, and the number of complaints against Senator Franken is a concern. I think resignation is the right thing for him to do."

Senator Franken’s behavior was wrong. He has admitted to what he did. He should resign from the Senate.

Dem MN Sen Klobuchar has not said whether Franken should stay or go. But just released this statement: “Senator Klobuchar personally spoke with Senator Franken this morning. As has been reported, he will be making an announcement tomorrow morning.”

.@SenatorCollins tells @tedbarrettcnn: “The latest allegation adds to a very disturbing list of allegations against Sen. Franken. And I think it would be best for the Senate if he followed the advice of his Democratic colleagues.”

UPDATE (12:37 p.m.): We're up to nine women now, as Sen. Heidi Heitkamp (D-ND) has issued a lengthy statement saying that she thinks Franken should leave the Senate.

We must commit to zero tolerance – which is where I believe we as a country and Congress should be – and that means Senator Franken should step down. Full statement: pic.twitter.com/4qrZB0mBTo

UPDATE (12:31 p.m.): Sen. Debbie Stabenow (D-MI) has become the eighth female Democrat to call for Franken's resignation. Stabenow said quitting the Senate would be the "right thing" for him to do.

Sexual harassment is unacceptable. I believe Senator Franken should do the right thing and resign.

UPDATE (12:17 p.m.): Sens. Sherrod Brown (D-OH) and Joe Donnelly (D-IN)  as well as DNC Chairman Tom Perez have both said that Franken should resign. Brown said that "the time has come" for Franken to leave.

We have a serious problem in this country with sexual harassment and assault – in Congress, in Hollywood, in business, in the military – everywhere.

Joe is calling for Senator Franken to resign. pic.twitter.com/ff5i1rnhJs

Sen. Al Franken should step down. Everyone must share the responsibility of building a culture of trust and respect for women in every industry and workplace, and that includes our party.

I agree with my colleagues who have stepped forward today and called on Senator Franken to resign. We can’t just believe women when it’s convenient.

I believe it is best for Senator Franken to resign.

In the span of a little over 15 minutes, six female Democratic senators called on their colleague Al Franken (D-MN) to step down from his position. Sens. Kirsten Gilibrand (D-NY), Mazie Hirono (D-HI), Claire McCaskill (D-MO), Maggie Hassan (D-NH), Kamala Harris (D-CA), and Patty Murray (D-WA) all issued statements saying that they believe that members of the Senate should be held to higher standards and that Franken has not met these standards.

Sen. Gilibrand's statement came first, saying that she's spent "a lot of time reflecting" about the wave of sexual assault and harassment allegations. While she thinks that Franken is entitled to the Ethics Committee hearing he requested in the wake of the initial allegation against him, she thinks he should not be in the Senate. She released a longer statement on her official Facebook page.

As elected officials, we should be held to the highest standards—not the lowest. The allegations against Sen. Franken describe behavior that cannot be tolerated. While he’s entitled to an Ethics Committee hearing, I believe he should step aside to let someone else serve.

Over the past weeks, I’ve spent a lot of time reflecting on the moment of reckoning we’re in on this issue of sexual assault and harassment. We have to rise to the occasion, not shrink from it. I’ve written more here: https://t.co/n3DYiGnV0g

Shortly after, Hawaii's Sen. Hirono tweeted her own statement saying Franken should "step aside." She said that she's "struggled" with this as Franken is one of her friends, but she believes he has mistreated women in the past. She cited the TIME Magazine's selection of "The Silence Breakers" as part of her rationale for speaking out now against Franken. Hirono said it was important to "create a culture" that respects women as equals to their male counterparts.

Today, I am calling on my colleague Al Franken to step aside. I’ve struggled with this decision because he’s been a good Senator and I consider him a friend. But that cannot excuse his behavior and his mistreatment of women. (thread)

TIME Magazine, by naming ‘The Silence Breakers’ as their ‘People of the Year,’ is recognizing what women have always known: there are men among us who use their positions of power and influence to manipulate, harass, and assault women. What is new here is the women.

My hope is that this moment for a cultural change will result in women no longer being viewed as objects or toys, but recognized for their abilities and achievements. As regular human beings. Women have endured this behavior, which for too long has been ignored and tolerated.

But no longer. We can only create a culture where women are respected as equals if we all step forward and be part of the change by holding everyone, especially our leaders, accountable.

McCaskill was blunter than her colleagues, and tweeted out that Franken should resign.

Sen. Hassan echoed her colleagues and said that it was "clear" Franken has a "pattern of egregious and unacceptable behavior towards women," and therefore should leave the Senate.

It is clear that Al Franken has engaged in a pattern of egregious and unacceptable behavior toward women. He should resign.

We are experiencing a change in our culture that is long overdue, and we must continue working to empower all women and do everything we can to prevent sexual harassment, misconduct, and assault.

Sen. Harris said she believed it would be the "best thing" for Franken to leave the Senate.

Sexual harassment and misconduct should not be allowed by anyone and should not occur anywhere. I believe the best thing for Senator Franken to do is step down.

I’m shocked and appalled by Senator Franken’s behavior. It’s clear to me that this has been a deeply harmful, persistent problem and a clear pattern over a long period of time.

It’s time for him to step aside.

Respecting women as equals and not as objects is critical. Sexual harassment, or assault, or in any way using your power to demean women cannot be tolerated. I want my colleagues, my staff, my constituents, and especially my granddaughters to know that is not acceptable.

It’s time for us as elected representatives to hold ourselves to a higher standard, to set an example, and to live a set of values that is truly representative and worthy of the Congress, our democracy, and our great country.

This post will be updated if anyone else calls for Franken's resignation.