Susan Collins is a 'Yes' On Tax Reform Bill 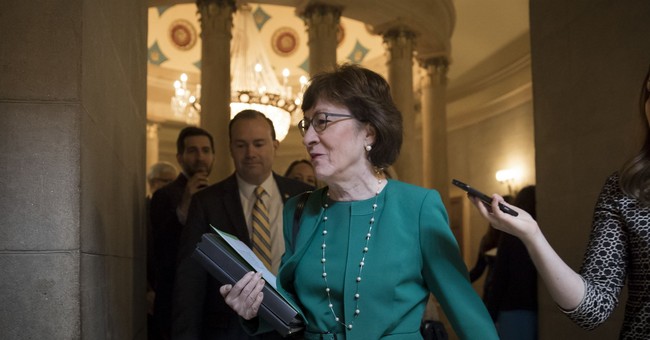 Sen. Susan Collins (R-ME) will be a "yes" vote on the tax reform bill, her office announced on Friday afternoon. Earlier, Collins had issued statements that seemed to be leaning towards her support of the bill, but had not explicitly said how she would be voting.

#BREAKING: U.S. Senator Susan Collins announces that she will support The Tax Cuts and Jobs Act.

A number of her proposed amendments were added to the bill.

The Senate tax bill will include my SALT amendment to allow taxpayers to deduct up to $10,000 for state and local property taxes.

Delighted that the Senate has agreed to include my property tax deduction amendment, that will allow 166,000 Maine taxpayers who itemize to deduct a total of $725 million in property taxes each year. #MEPolitics

The Senate bill will include my amendment to reduce the threshold for deducting medical expenses, which helps people with high medical costs, particularly seniors & people with chronic conditions. 8.8 million Americans use this deduction, half with incomes of $50,000 or less.

The Sen. bill will include my amendment to reverse ill-advised elimination of catch-up contributions to retirement accounts for church, charity, school, & public employees. Amend. will protect ability of employees, including firefighters & police officers, to save for retirement.

Her office's full statement can be read here.

As revised, this bill will provide much-needed tax relief and simplification for lower- and middle-income families, while spurring the creation of good jobs and greater economic growth. (2/2) pic.twitter.com/QB4iM7EdAt

Now, Sen. Bob Corker (R-TN) is the only Senate Republican who has not yet announced how he'll vote on the bill.