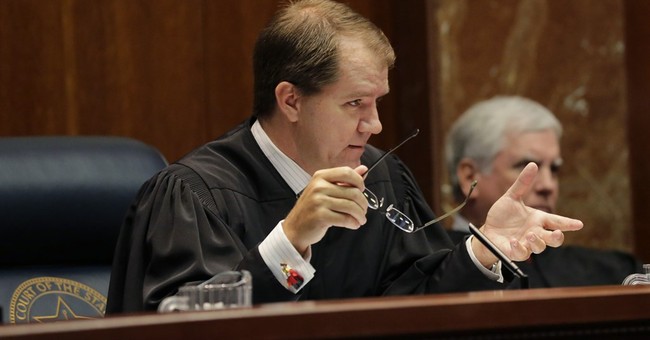 Justice Don Willett, who has been nominated by President Donald Trump to the 5th U.S. Circuit Court of Appeals, performed the Heimlich maneuver on a choking man at a Chick-Fil-A restaurant in Austin, Texas on Tuesday night. Willett, along with another man, were able to successfully dislodge the chicken nugget from the man's airway and effectively saved his life.

Willett is now calling for everyone to be trained in the Heimlich maneuver, CPR, and other first aid techniques. He said he "squeezed (his) wife and three wee Willetts a little tighter" after the harrowing experience at Chick-Fil-A.

“I was hunched over my MacBook, munching some Chick-fil-A chicken strips while discussing errands with my wife on my cell,” Willett recounted in an email to the American-Statesman.

“Suddenly, a nearby customer rushed to the booth in front of me and started performing the Heimlich maneuver on a dad who was dining with his young daughter. I hung up on my wife (first time in 21 years!) and jumped up.

“The quick-acting Good Samaritan, Herson De La Garza, a middle school band director, had given three or four upward abdominal thrusts, but the man was still choking. Herson stepped aside, and I gave a quick thrust or two, dislodging the nugget and clearing the airway.

“Herson was first on the scene and deserves enormous praise. I’m writing a letter to the superintendent recounting Herson’s Heimlich heroism. This all happened in the blink of an eye. I implore everyone to get trained on the Heimlich, CPR, and other basic life-saving skills. I squeezed my wife and three wee Willetts a little tighter tonight, and we prayed for this man's dear family. Life is precious — and fleeting.”

Prior to this incident, Willett was mostly known for his hilarious--and at times controversial--antics on Twitter. Now it looks like he can add "hero" to this list.