Bernie Sanders Was Just Nominated for a Grammy 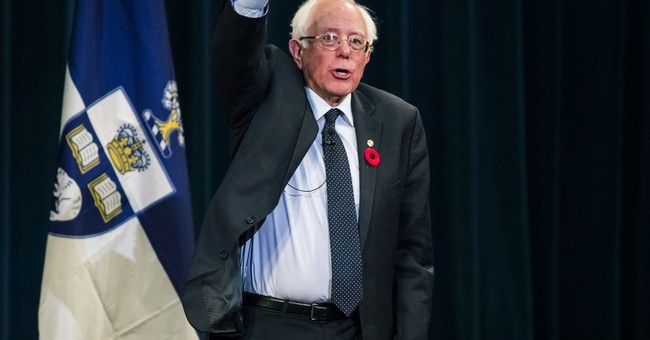 Sen. Bernie Sanders (I-VT) may not have won the Democratic nomination for president, but he was just nominated for a Grammy Award. Sanders, along with actor Mark Ruffalo, received the nod for the audiobook recording of Sanders' book “Our Revolution: A Future to Believe In" in the category of Best Spoken Word Album.

The book was published on November 15, 2016. This is Sanders' first Grammy nomination.

If Sanders were to win, he'd be the sixth politician to win the award since 2000, although Sen. Al Fraken (D-MN) had not yet been elected to the Senate when he won in 2004.

Sanders was nominated in the spoken word category for the audio book version of “Our Revolution: A Future to Believe In,” along with actor Mark Ruffalo. The book was published just after the presidential election.

They face some major competition: Also nominated in the category were Neil Degrasse Tyson for “Astrophysics for People in a Hurry,” Bruce Springsteen for “Born to Run,” Shelly Peiken for “Confessions of a Serial Songwriter,” and Carrie Fisher for “The Princess Diarist.”

The category has a long history of recognizing political figures: Jimmy Carter won a Grammy in 2016 for the audio book version of “A Full Life: Reflections at Ninety.” He also won in 2007 for his book “Our Endangered Values.”

On Twitter, Ruffalo congratulated Sanders on his nomination and said that he was "honored" to be part of the book.

Congratulations @SenSanders for your #GRAMMYs nomination! Honored to be a part of your wonderfully human #OurRevolution Book. https://t.co/ERRClpO0OY