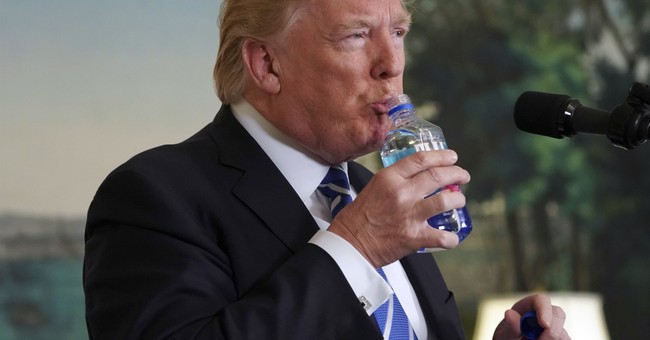 Today, during his speech recapping his trip to Asia, President Donald Trump got a bit of a dry mouth and took a sip of water.

He pulled a Rubio, as one does. (Rubio took an awkward sip of water during his State of the Union response in 2013.)

WATCH: President Trump abruptly pauses White House address for a sip of water: "Hang on, I don't have water...what?" https://t.co/3x7jfbVImS

Now, because this is 2017, the internet had some feelings about it:

Of course, there was an old, relevant Trump tweet:

oh and HERE IS ANOTHER TWEET FOR EVERYTHING https://t.co/eOuBbiGiVN

Fiji Water is owned by Stewart and Lynda Resnick — Beverly Hills billionaires who have supported Hillary Clinton and other high profile Dems pic.twitter.com/Ng9q3w6shx

Even Sen. Rubio (R-FL) weighed in and gave some constructive criticism on President Trump's "technique."

Similar,but needs work on his form.Has to be done in one single motion & eyes should never leave the camera. But not bad for his 1st time https://t.co/s49JtyRo3S