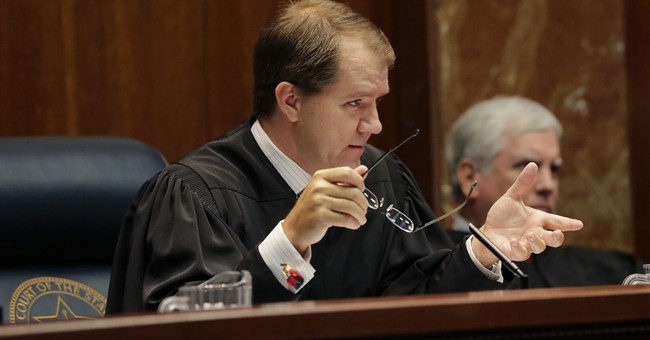 During his confirmation hearing on Wednesday, Sen. Patrick Leahy (D-VT) asked 5th U.S. Circuit Court of Appeals nominee Don Willett to explain one of his tweets where he said that he would support a constitutional right to marry bacon. Leahy suggested that the tweet indicated that Willett would not respect precedent if he were confirmed to the court.

I could support recognizing a constitutional right to marry bacon. pic.twitter.com/HKPW6tE4H6

The tweet in question was sent on April 30, 2015, two days after oral arguments were heard by the Supreme Court in the Obergefell v. Hodges case. The decision was announced on June 26, 2015. Willett (erroneously) said that it was made after the decision was issued, and was his attempt to "inject a bit of levity" to a "divisive time."

"Senator, I believe every American is entitled to equal worth and dignity. I've never intended to disparage anyone, and would never do so. That's not where my heart is," Willett explained. Leahy seemed unwavered.

Earlier in the hearing, Leahy said that Willett's tweet about a male-to-female transgender athlete joining a softball team was offensive, and meant that Willett would not be fair to a case involving an LGBTQ person. That tweet was made on February 14, 2014. Willett explained that the tweet was intended to be a reference to former New York Yankees player Alex Rodriguez, (who had recently dropped a lawsuit against the MLB and serve a yearlong suspension) not the transgender athlete.

I mean, come on. Both of those tweets were clearly jokes, and Willett was officially named the "Tweeter Laureate" of Texas in 2015. It's not a good look to be so incredibly humourless that you'd attack a person for tweets that were not intended to be serious. Willett should be judged on the merits of his decisions, not for his 140-character bursts. (Which are, admittedly, quite funny.)

Since he was nominated to the court, he has ceased his Twitter use, save this tweet earlier on Wednesday:

"To live under the American Constitution is the greatest political privilege that was ever accorded to the human race."
—Calvin Coolidge pic.twitter.com/l9q5FcdqwU