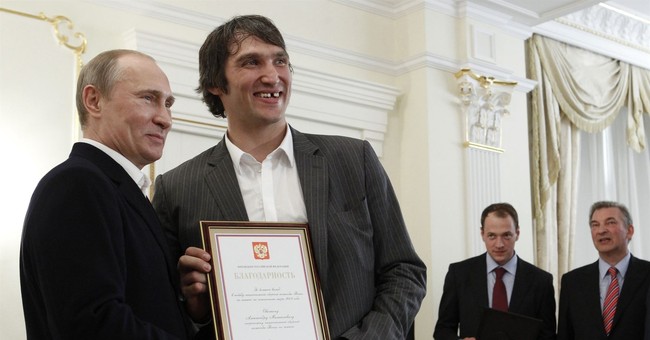 Washington Capitals star Alexander Ovechkin caused quite a stir on Thursday when he posted an Instagram urging people to support Russian President Vladimir Putin as part of a new initiative called "Putin's Team." The Russian-born hockey star stressed the importance of having a team, not only in sports, but in supporting politicians as well. The first round of the Russian presidential elections will be on March 18, 2018. Putin is eligible for another six-year term, but he has not yet announced his intention to run.

A post shared by Alexander Ovechkin (@aleksandrovechkinofficial) on Nov 2, 2017 at 9:07am PDT

According to the Washington Post, the caption translates to:

“Personal achievements and medals – all of this great, but in hockey, like with everything, to win it’s important to have a team. Only a team is capable of changing the course of a game, achieve the impossible. Lately, in the Western Press, I’m noticing a comparison to Putin’s team. And you know, I really liked that comparison. Personally, I’m ready to be a member of that team. I never hid my relationship with our president, always openly supported him. I’m certain that there are many of us that support Vladimir Putin. Let’s unite and show everyone a strong and united Russia. Today, I want to announce a social movement in the name of Putin Team. Be a part of this team – to me it’s a privilege, it’s like the feeling of when you put on the jersey of the Russian team, knowing that the whole country is rooting for you. #putinteam"

“I just support my country, you know?” Ovechkin said. “That’s where I’m from, my parents live there, all my friends. Like every human from different countries, they support their president.”

Ovechkin and Putin have been close for a while, and in 2011 Ovechkin said that he had one of Putin's personal phone numbers. When the NHL decided to skip the 2018 Olympics, Ovechkin was adamant that he'd still be playing for Team Russia come February 2018. (He eventually conceded that this wasn't going to happen.)

Still, this is particularly weird for a very high-profile athlete to come out so strongly for a politician, particularly one that's not exactly on great terms with the country in which he currently lives. Putin's regime has committed human rights atrocities, and corruption is out of control. It's not a good look to publicly support a dictator and encourage other people to jump on board as well. Ovechkin is one of the most popular athletes in the DC area (and one of the most popular NHL players, period), and this move is certainly a divisive one.

Putin, should he run again, will almost certainly win reelection by a landslide--which begs the question as to why Russian athletes are being tasked to publicly show their support for him.

Addendum: here's an interesting thread from back in July about how Russian hockey and Russian politics, particularly how Putin has attempted to stoke Soviet nostalgia and national pride via the country's national team. It's some pretty wild stuff.